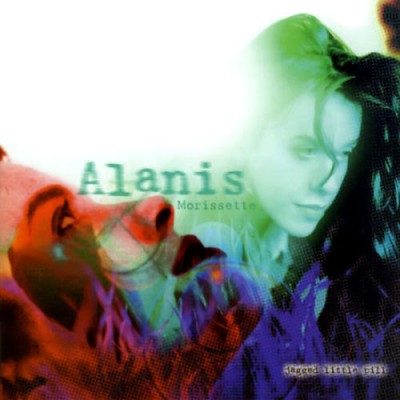 Sometimes it all starts with a chord played on an electric guitar. In this case, it’s a B flat, fading away into the fullness of the band and more importantly, one woman’s voice. 20 years ago this week, Alanis Morissette’s Jagged Little Pill hit store shelves across America, changing the landscape of the ’90s music scene for the better.

That riff belonged to the albums first song, “All I Really Want,” which ended up being the albums sixth and final single. It was an album that came out at a time when the smell of grunge was still thick and the bubblegum pop of the late ’90s was still years away. Here we were in 1995 jamming along to chick rock at its very best. Before Jagged Little Pill, Morissette’s music career had defined mediocrity. Her debut album was a dance-pop album and her second was filled with slower ballads and it flopped commercially. Then she dropped the hammer.

On June 13th, 1995 Jagged Little Pill came out alongside its debut single “You Oughta Know.” It was an album of coming of age songs and life lessons from a woman who was just coming of age herself. The perspective on her age is one of this albums most intriguing stories. When the album came out, she was just 21 years old, recording with top flight industry mainstays like Flea (33 at the time) from The Red Hot Chili Peppers and Dave Navarro (28 at the time) of Jane’s Addiction.

The growth of Jagged Little Pill as a force in American music happened overnight. The album sold fast and it did so over an inconceivably short amount of time.

It took just two months for the album to earn it’s Platinum certification (1 million copies sold), on August 25th, 1995. About a month later the album went double platinum and triple platinum a month after that. By January of 1996, Jagged Little Pill had eclipsed five million albums sold. Then things really got interesting. While songs like “You Learn” and “Ironic” continued to dominate on the radio, Jagged Little Pill sold one million copies per month from January of 1996 until May of 1996.

On July 28th, 1998, Jagged Little Pill received it’s final RIAA Certification to date, reaching 16x Platinum and putting it among a selected group of artists that have reached this incredible feat in the United States. Looking at the worldwide best selling albums of all time, Morissette is in rare company, surrounded by Shania Twain and Led Zeppelin (just ahead of her) and Celine Dion and The Beatles (just behind her).

Glen Ballard, the albums producer was as responsible as anyone for the albums success. An industry veteran, Ballard worked on albums such as Michael Jackson’s Thriller and more recently on several of Katy Perry’s albums. Ballard is credited as a writer on every single song on Jagged Little Pill which remains one of his most successful projects.

On its 20th birthday, it’s fun to look back at where this album originated, but the future is almost as exciting. As young girls and boys, who grew up in cars with Jagged Little Pill playing all day long come of age, the album has found a resurgence once again. The ’90s were a time of dark messages (see: Nirvana) and over the top outrageousness (see: Eminem) in music. But Morissette cut through all of that. She was the artist that you, your mom and your grandma could all listen to and that tradition lives on today.