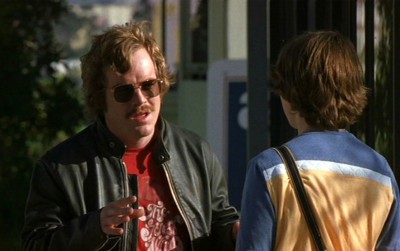 This is no longer breaking news but I felt that it was necessary to post it anyway. It has been known for a long time that I’m not the biggest Philip Seymour Hoffman fan. I just didn’t get him the way some others did. That being said, I respect him as an actor and admit that he will be sorely missed.

Despite my not loving him, there are two performances that will forever stick in my head and they’re not the ones you’re thinking of. Just hear me out.

After roles in The Big Lebowski and cult favorite Boogie Nights, he took a small role in Almost Famous, playing Lester Bangs, an aging rock critic. He guided a young William Miller, played by Patrick Fugit through the movie and ultimately to his goals. The phone conversation that they have in the latter part of the movie really stands out for me. It was a poised scene with both actors showing emotion and features a dialogue that I contend is among my favorites of all time.

Lester: Aw, man. You made friends with them. See, friendship is the booze they feed you. They want you to get drunk on feeling like you belong.
William Miller: Well, it was fun.
Lester: They make you feel cool. And hey. I met you. You are not cool.
William: I know. Even when I thought I was, I knew I wasn’t.
Lester: That’s because we’re uncool. And while women will always be a problem for us, most of the great art in the world is about that very same problem. Good-looking people don’t have any spine. Their art never lasts. They get the girls, but we’re smarter.
William: I can really see that now.
Lester: Yeah, great art is about conflict and pain and guilt and longing and love disguised as sex, and sex disguised as love… and let’s face it, you got a big head start.
William: I’m glad you were home.
Lester: I’m always home. I’m uncool.

Of course this wasn’t Hoffman’s largest role. That would come five years later in Capote. But for his limited screen time in Almost Famous, he makes a seismic impact on the movie. A movie that is one of my favorites.

The other role that I wanted to point out is going to sound ridiculous. In 2004, Hoffman played Sandy Lyle in a movie called Along Came Polly. The Ben Stiller comedy featured Jennifer Aniston and was pretty silly on the grand scale.

What I’ll always remember is how ridiculous I thought Hoffman’s character was. He played an overweight, struggling actor who hires a camera crew to make a VH1 style documentary about him. It’s as crazy as it sounds and very ironic. Hoffman was actually a very accomplished stage actor and this was truly acting for him. He played a character so far out and believable that I thought this was the Hoffman persona for about a year after that.

It’s hard to believe but these are the two performances I will always remember Hoffman for. Not Capote, not Charlie Wilson’s War, not Doubt and not Moneyball. I will remember Hoffman for ‘making it rain’ in Along Came Polly and for being the uncoolest guy in Almost Famous.