Album reviews are the bread and butter of music criticism. However, often so much of a review is spent talking about the musician, or the circumstances of the recording process that the actual songs on the record don’t get the discussion they deserve. Triple Take examines a string of 3 songs on an album, how they fit together, and how they fit on the record as a whole. 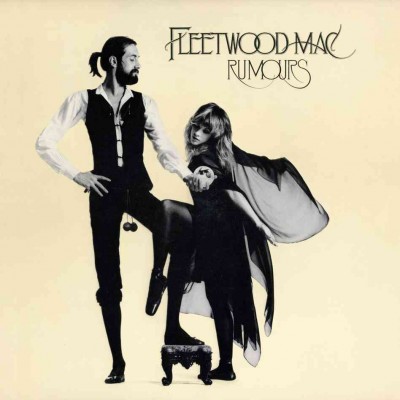 As albums go, Rumours by Fleetwood Mac is considered amongst the greatest in history. It is the sixth best selling album in US history and has sold over 40 million copies worldwide. Only Michael Jackson’s Thriller, Pink Floyds Dark Side of the Moon, AC/DC’s Back In Black and the Bee Gees Saturday Night Fever have sold more.

It’s greatness obviously runs deep into it’s 39-minute run time but the first three songs from this album set a tone that has never been duplicated. They are three songs that have stood the test of time and helped to shape one of the worlds greatest musical compositions.

“Second Hand News” opens Rumours with pace that is just perfect. It’s not a fast song. It’s not a slow song. It’s just the right pace for what it is. When the album came out in 1977, it was the very first thing that a listener would hear on side-a and the slow fade in of a distant guitar draws the ear right in.

The other thing that the song does is establish a vocal style for the band, which is reflected all over the album. Written by Lindsey Buckingham, almost the entire song is a duet with Stevie Nicks. As the song begins to wind down, it actually starts to get louder with a melodic repeat of “I’m just second hand news, I’m just second hand news…” Finally, Buckingham’s guitar takes over with a doodling solo that takes the song home.

Second up is “Dreams.” Out of this albums first three songs, this is the only official single. While all three songs would later find radio play in the classic rock bin, “Dreams” was officially the second single, released in March of 1977, one month after the albums release (the first single was “Go Your Own Way” which came out in January of 1977). “Dreams” was also the only single from the album to reach #1 on the Billboard Hot 100 and years later, it remains the bands only #1 song. 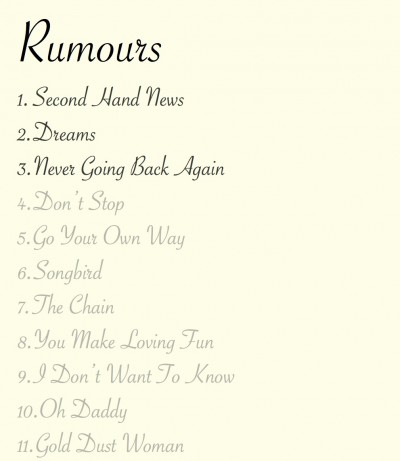 In direct contrast to “Second Hand News,” “Dreams” opens slower, with Nicks’ voice right out front. The entire song is driven by a repetitive bass line with layers and layers of intricate sounds. It’s not until the chorus that you hear a faint acoustic guitar driving the melody forward. Nicks has been quoted numerous times as saying that she wrote the entire song in ten minutes and it shows. It is one of the simplest songs on the album yet carries a tremendous amount of weight.

Finally, the third track on the album is titled “Never Going Back Again.” This song could be seen as Buckingham’s masterpiece. As both the lead guitar player and one of the primary singers, it is all about him on track three. Opening with a simply beautiful acoustic guitar noodle that is as catchy as any lyric, his voice comes in after a few bars and takes over.

It’s rare to find a song that represents a single band member so strongly. With a band of talented musicians behind him, every other part of this song just fades to black. His ability to perform the song is equally impressive. The noodling of his guitar is a solo that lasts for an entire 2:15 of the song and he is able to sing the lyrics over the guitar with a soothing tone.

how to get your ex back

With only the one single scattered amongst the albums first three songs, it is very telling that Rumours would go onto have the type of success it did. In 1977, albums were listened to in full out of sheer ease. You couldn’t easily skip to the song you wanted to hear. Albums were the dominant form of music consumption and these three songs paved the way for an album that would go on to become one of the greatest of all time.