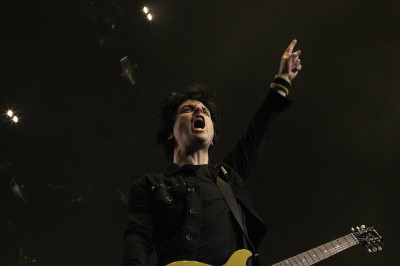 Billie Joe Armstrong As Fired Up As Ever

As cliches go, drug and alcohol abuse in the music industry sits near the top of the list. Each year, stories arise about this musician and that musician entering rehab for various substance abuse issues. When Billie Joe Armstrong, Green Day”s energetic lead singer entered rehab last year, suddenly halting a world tour, the music world shouldn”t have been overly surprised. Together since 1987, Green Day is based on living a free spirited, free to do whatever they want lifestyle.

Now, six months later, Green Day, led by Armstrong are firing back and ready to prove that they can still light up an arena as they enter their forties.

Entering the Mohegan Sun Arena in Uncasville, Connecticut, I had an internal debate raging. Had Green Day, a band that I grew up with, entered legacy status? There”s no shame in this. The Who, Rolling Stones and AC/DC had been thriving in this world for years. Hell, Billy Joel has bee in legacy status since 1993″s River of Dreams. It”s not as if entering legacy status is a negative as much as it is a coming of age tale for a group of musicians.

Legacy status doesn”t necessarily mean that a band has stopped writing and recording new music. Instead it refers to the audience makeup at a concert. Paul McCartney is still recording albums of original music but the audience who attends his shows are in attendance to see him perform “Maybe I”m Amazed” and “Let It Be.” A long standing community of loyal Green Day fans seemed to have let the latest trio of releases, Uno!, Dos! and Tre! pass by without giving them much thought. After six straight platinum albums (dating back to 1994″s Dookie), the three albums sold less than 1 million copies in the United States, combined.

Fueled by a lack of album sales, this question lingered over my head right up until the band hit the stage to a standing ovation from the sold out 10,000 seat arena. Did this crowd care about the new music? Would they even know the words? Less than a minute later my question was answered. 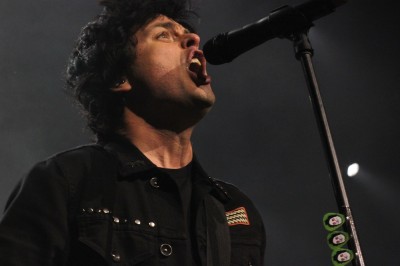 Opening their set playing five songs from their last four (and lowest selling) albums, the crowd began to sing every word of “99 Revolutions” back to Armstrong. “A common cause and a call to arms, for the health of our daughters and our sons” the crowd screamed in a frenzy. While half the crowd, made up of Green Day fans who tuned out after American Idiot waited in relative silence, an onslaught of younger, hungrier Green Day fans rejoiced over anthems such as “Oh Love,” the lead single from Uno!.

Finally, once the younger fans were fired up, Green Day jumped into the time machine, performing the songs that put them on the map. The punch in the face that is “Burn Out.” The groove of “Hitchin A Ride.”  The hits “Brainstew” and “Basket Case.” Each song was greeted by a flurry of support from the entire crowd, young and old.

With a delicate balance of new and old, it was clear that Billie Joe is trying his hardest to push the legacy tag off for a few more years. As of this day in 2013, it seems as if he”s succeeding. That point was made clear as the nearly three hour set came to an end. Seeming to always end on a somber note, Green Day followed “American Idiot” and “Jesus of Suburbia” not with 1997″s “Good Riddance” or 2004″s “Wake Me Up When September Ends.” Instead, they closed the show with “Brutal Love,” a slow and somber anthem for a new generation of Green Day fans.