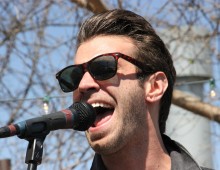 In what has quickly become one of our favorite

moments in four years at SXSW, up and coming pop-rock quartet American Authors performed their single “Believer” acoustically from their tour van on Thursday. The band has recently seen a lot of success with major plays on Alt Nation, Sirius/XM”s alternative rock station and have a played a number of high profile showcases during SXSW. We”re expecting 2013 to be an amazing year for this group and hope you enjoy their exclusive performance.