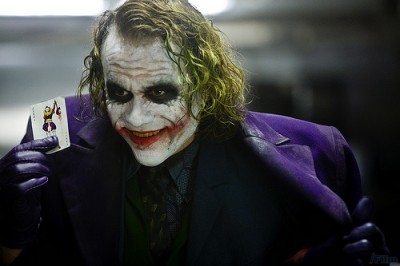 Heath Ledger has become one of the scariest big screen villains of all time.

Two ferry’s full of people sit idle, filled with enough explosives on board to put a small hole in the earth. Fictional characters within Gotham City are terrified. A hospital, full of people sits poised to explode, without any regard for the safety of those inside. Those people could have become casualties in a movie series that has taken on a life of its own.

After a painfully slow start with Batman Begins, Christopher Nolan went to work unveiling his masterpiece, The Dark Knight in 2008. While superhero movies have been around since the 1940′s, Nolan and his team took it upon themselves to take the genre in a radical new direction.

The genius of Nolan’s Batman series lies in horrible events that took place four years before Batman Begins premiered. On September 11th, 2001, the United States collective heart sunk as a group of religious extremests attacked innocent people. While words like villain and evil were thrown around, one word would go on to categorize this group. Terrorists. 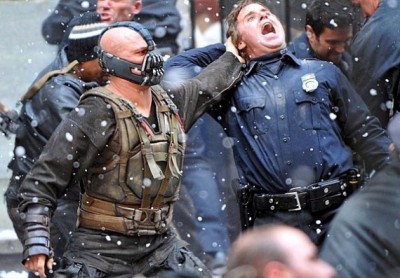 No one (save for the man himself) can say for sure if Nolan tried to do this or whether he hit the nail on the head by accident. Either way his use of the villain The Joker in The Dark Knight exposed a side of villainry usually reserved for the real world. We all know how most superhero movies are set up. A character like The Riddler tries to steal peoples brains through their television sets. Lex Luthor uses Krypton crystals to build a continent that would wipe out North America (that was actually the plot of Superman Returns). While these plans are sinister, they aren’t scary because they aren’t real. In fact, they aren’t even close, often relying on technology that isn’t within the scope of human discovery. Similar to Pinky and the Brain’s attempts to take over the world, the plans are absurd.

This is where Nolan pitched a perfect game. Instead of turning The Joker into a cartoonish villain who squirts poison out of a flower, he made Ledger into a terrorist, charged with killing the citizens of Gotham. He shoots guns, he uses bombs and he created scenarios that were not only believable but highly probably given the movies plot.

While the final chapter in Nolan’s series, The Dark Knight Rises is still about a month from release, one can assume Nolan will finish the story with a bang. The trailer shows stadiums exploding, bridges crumbling and citizens screaming. All things that would be scary to an audience member. Although The Joker is out of the picture, Bane has taken up the reigns of terror as Nolan tries to turn a series that got off to a slow start, into an all time great superhero trilogy.