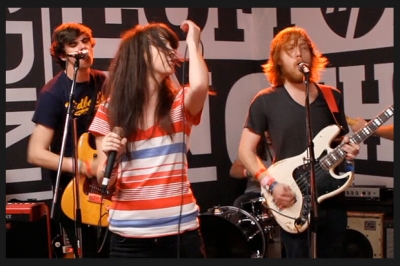 Opening slots are tough. Fans are often disinterested, talking and drinking before the band they came to see hits the stage. The best bands capitalize on these opportunities, drawing people into their portion of the show. Sleeper Agent pulled this off and more, winning over portions of the crowd with their intense brand of indie rock.

Sleeper Agent first hit our radar about a year ago when their single “Get Burned” came across our computer screens. The songs upbeat, guitar driven melody seemed like the perfect song to resonate in the New York music scene. Did it ever. The song, as well as the rest of the bands repertoire were well received by the sold out crowd that filled Irving Plaza for the nights headline act, Ben Kweller.

Although there styles are different, there is a similarity found in their live shows

. Full of energy and passion, both groups seemed to captivate the audience. For most in the crowd, Sleeper Agent was an unknown. It wasn’t until the band closed their set with “Get Burned” that you could see people turn to each other, mouthing, “oh this band” to one another. The song has made people take notice in the mainstream community, with appearances in commercials, video games and on top 40 radio.

As the band moves farther into a career in the indie rock world, it will be important to keep up the momentum. Bands often release a single and then fade away. It seems as if Sleeper Agents impressive song lineup will yield at least a few more singles and time will tell if they are able to click with indie rock audiences nationwide.

Check out “Get Burned” by Sleeper Agent below: