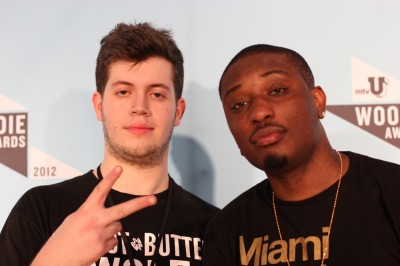 With thousands of musicians at SXSW for thousands of reasons, one thing separates Chiddy Bang from the pack. While some were there to learn and others were there to impress critics, Chiddy Bang came to Austin, TX in the middle of March to do one thing. Have fun. From the moment they hit the stage to the final question of our interview, we could tell that Chidera Anamege and Noah Beresin love to have fun and do what makes them happy.

Their performance at theMTV Woodie Awards could be described only as outrageous. Under th

e blazing Texas sun, Chiddy Bang tour through song after song, demonstrating the duos unique ability to pair world class production with hall of fame worthy rap skills. During the performance, Chidera smoked an entire joint that he had picked from an audience members hand. With that. We were in. They not only talk the talk. They walk the walk. The Truth About Music’s Tara Berkoski caught up with the group following their performance. Here’s what they had to say.