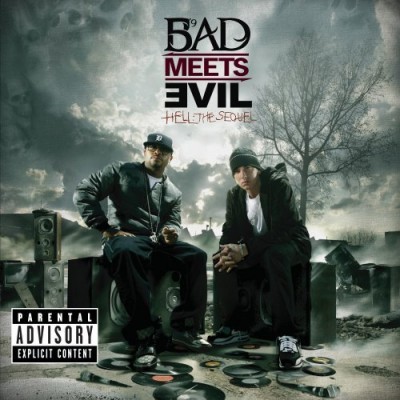 It’s rare when an album can blow someone away. Sure, there are some great albums out there but how often are we truly taken aback? Chances are it’s not all that often. With everyone and their mother talking about Kanye West and Jay-Z’s new album “Watch The Throne,” Eminem and Royce da 5’9″ quietly released their second album under the moniker Bad Meets Evil called “Hell: The Sequel.” What’s crazy is that this album came out almost two months ago!

Without the fanfare that accompanied the summer release of “Watch The Throne,” Eminem teamed back up with Royce da 5’9″ to create one of the best purely rap albums in recent memory. The past decade has been dedicated to merging a number of genre’s generally reserved for the African American communities. From the fusion of Hip-Hop and Soul by artists like Cee Lo Green and Beyonce to the Hip-Hop and rap fusion made extremely popular by Jay-Z with his last few albums, this album from Bad Meets Evil is plain and simple. It’s a dirty, dog eat dog rap album.

Eminem decided to leave his “Relapse” and “Recovery” behind him and instead focus on what got him into the business. He returns to his pure rap roots, laying down his nastiest lyrics since “The Marshall Mathers LP.” Not to be outdone, Royce da 5’9″ is pretty unknown by the mainstream hip hop community. Still, he matches Shady word for word as this duo lays the smack down on the rest of the rap community.

To be honest, this album’s lack of fanfare was partly because of the absence of a mainstream single. It wasn’t until the first week of July that the duo released “Lighters” which features hook master Bruno Mars. Now, about a month later, the song and second single, is finally rising on the radio charts. After the first single “Fast Lane” was a commercial bomb, “Lighters” is doing what every song featuring Bruno Mars does.

Finding perfection in an album can sometimes be difficult. In this case, there was a moment in time when it became clear. After hearing the single, the album quickly became a must listen. As the album rolls, the single fades into the back of your mind. It isn’t until track seven that the single reappears and you remember why you put the album on in the first place. An albums ability to break away from the single is often a sign of how good or bad that album is. In this case, it helps set the scene for a brilliant album.

It might be too early to call this the best rap album of 2011 but you could just as easily argue that this is the only mainstream rap album of 2011. With so many hip hop albums out there, it seems that the art of writing a true rap album has faded. Luckily, Eminem and Royce da 5’9″ and their supergroup Bad Meets Evil haven’t forgotten. This album is the type of album that you won’t want your kids to listen to. It’s the album that will scare grandparents and make republican lawmakers cringe. For all of those reasons, it is an amazing composition between two great rappers (and a few featured performers).