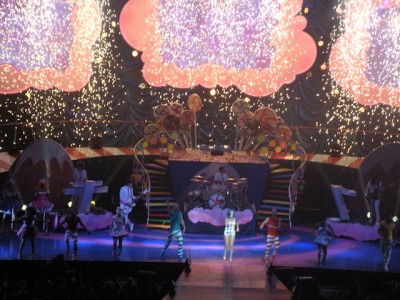 Over the past decade, artists have upped the ante. some have taken off more clothes, some have written racier lyrics and others have created an aura of darkness around their entire persona (see Rihanna and Lady Gaga for many of these). This set of attributes, dark, mysterious, daring, does not describe Katy Perry. Being the antidote to the darkness, Perry has released two albums in just three years, rising to superstardom, all while creating a world filled with cupcakes and polka dots instead of lingerie and political controversy.

Perry’s most recent album was 2010′s Teenage Dream which has sold 1.5 million copies in the United States and renewed her world of fluffy clouds and lollypops. What’s ironic about Perry is that in spite of her bubble gum world, created for her fans, many of which haven’t even hit puberty yet, most of her songs have a sexual undertone strong enough to take Charlie Sheen.

In one of the most unique displays of showmanship, Perry’s live show is as warm and cuddly as the rest of her persona. The show paints the story of a young Perry and her move from butcher house slave to an eventual romance with a baker with a fall into an Alice like dreamland in between. There’s everything from virtual sexual foreplay in the song “Peacock” to a special brownie induced dream during “I Kissed A Girl.” 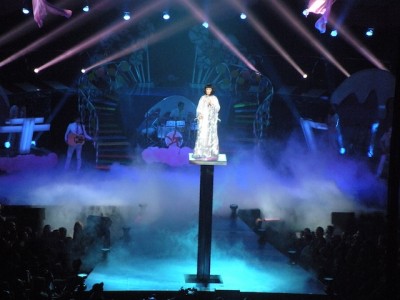 A truly great surprise was Perry’s presence as an industry leading superstar. She owned the stage like only she could, flaunting her sexual prowess and working the crowd like a champ. She walked a perfect line between bitchy mom and girl next door, making fun of audience members for looking like Justin Bieber or kicking there girlfriends in the face for a chance to be on stage with her.

The oddest part of the entire concert was which songs got the largest reactions from the fans. Aside from current single “E.T.” and last years summer smash “California Gurls” the crowd went absolutely crazy for songs like “I Kissed A Girl” and “Hot and Cold” from Perry’s 2008 album One of the Boys. Even lesser known singles like “Thinking of You” got big cheers from the sold out show.

When the night came to end, a scary combination of intoxicated twenty somethings and candy coma induced preteens were infatuated with Perry on almost every level. The men wanted to marry her, the women wanted to marry her and the kids just wanted to eat more cotton candy. All in all, the show was satisfying to both the ears and eyes, something that many shows these days try and fail to do. Perry pulls it off like almost no other artist could do. Full of bubble gum, clouds and lots and lots of pink.