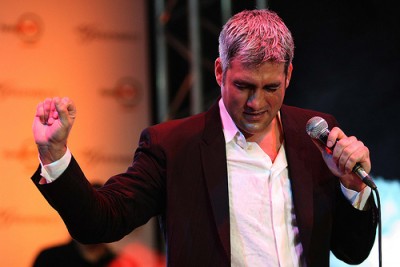 In order to understand this review, it’s probably important to know the backstory. About three months ago, after posting an article about how Taylor Hicks Ruined American Idol, we were inundated with comments and Tweets from die hard Hicks fans telling us to go shove it. After a few snide remarks coming directly from Hicks’ personal Twitter account, he reached out and invited our crew to a show while he was in New York. It was only fair to come out to the show. Maybe our thoughts on him would change. Miracles can happen.

This was not one of those moments. It needs to be made very clear. Taylor Hicks puts on a great show. His band kicks some major butt, especially his horn and piano players who spent a large amount of the night playing killer solos. The rest of the band, comprised of two percussionists, a bass player and a guitarist create a truly great big band style sound. Even Hicks had his moments, blaring some amazing harmonica solos into his microphone. That’s where the positives end.

What lowers the expectations is realizing what you’re watching. You’re watching a former American Idol winner, who received millions of votes on national television, playing to a crowd of under 300 and essentially, mimicking a really good lounge singer. Honestly, we didn’t expect anything more. Hicks did the same thing on American Idol and continues to do shine in that regard. The worst parts of the show came when he performed songs he had either written or arranged. It felt like forced songwriting instead of a natural flow of words.

The entire vibe for the show was very odd. While many people in the crowd were very interested in the show, it seemed that another large portion was more interested in eating the delicious food served at City Winery. There were even a few older gentlemen having trouble staying awake. It seemed that the huge following Hicks has online, doesn’t translate all that well in New York.

The moral of the story is that I respect Hicks. Although he did compete, and miraculously won Idol, he was and will always be a midwestern lounge singer. He rocks that role and although that’s what we expected, it’s not the way he was pitched to us online. We were told that seeing him live would open our eyes and blow us away. Unfortunately, none of that happened. Instead we were left with a Billy Joel type lounge singer. The only difference between Joel and Hicks is that Joel is a brilliant songwriter. Hicks should probably stick to covers and standards as he continues to ride the wave as an American Idol winner.