Drawing comparisons between bands isn’t something I love to do. It’s too easy to say that a band sounds like Band A, mixed with Band B. It’s an overused cliche in journalism and rarely gives the insight that readers deserve. Let me state this right up front before people start having a coronary. I’m not drawing a comparison between the sounds of Mumford & Sons and Modest Mouse. This take is based solely on their place in the pop music world and the legacy they leave behind.

During this month, seven years ago (January of 2004), very few people had heard of Modest Mouse. To that point, they had made waves in the indie rock world releasing three full length albums after forming in 1996. Most people heard the band for the first time one month later when the bands first charting single was released. During the first few seconds of “Float On,” any true music fan can identify the unique elements in this bands smooth indie sound.

Built around the uniqueness of their lead singer Isaac Brock, Modest Mouse peaked very early. Their best selling album was “Good News for People Who Love Bad News” which sold over a million copies in the United States and the aforementioned single would be the bands only #1 song on the Billboard Modern Rock charts. Since this initial success back in 2004, they have released just one album (“We Were Dead Before the Ship Even Sank” in 2007) which was certified Gold. While they have had a great indie run over the years, they’ve never recaptured the success of their debut single or album.

We fast forward seven years. It’s late 2009 and a song is generating huge buzz for another band mos mainstream rock listeners have never heard before. We learn after hearing the song, which is centered around a very unique lead singer (Marcus Mumford), that the band is called Mumford & Sons and the song is called “Little Lion Man.” In the few months since the single was released in the United States, the indie band from England has been in the spotlight constantly. Their debut album “Sigh No More” has been certified Gold and the single has reached the tops of multiple Billboard charts and was recently nominated for a Grammy Award (Best Rock Song). 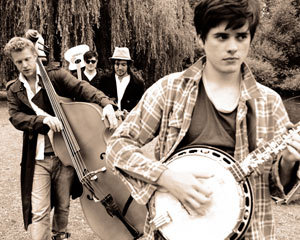 Now the comparisons come to the surface. Both bands were nominated for Grammy Awards in their first years of qualification. Both bands had incredible success on their debut albums and the subsequent singles. Both bands are led by the unique elements in their lead singers voice. Both bands live in the world between indie rock and mainstream pop/rock. The number one thing that these two bands have in common is a flair for being true indie rock bands. Their sounds are built for their true indie fans and their singles are aberrations, coming from a place of pop euphoria. True fans of the bands think these are the worst songs on the album while mainstream rock fans rejoice over the unique sound found in contradiction to the average top 40 rock song.

Time will tell us if this article was blowing smoke or tells the tale of two very similar bands who found mainstream success early on and plummeted from the rafters in the years following. For now, it’s easy to conclude that Mumford & Sons and Modest Mouse have had very similar breaks into the pop world while their indie roots attempt to cling to the fans they are leaving behind. I hope that Mumford & Sons take the path less traveled, creating more pop centric songs and growing their career instead of flatlining and staying stuck in indie rock purgatory for the rest of their careers.