Album of the Month: My Beautiful Dark Twisted Fantasy by Kanye West 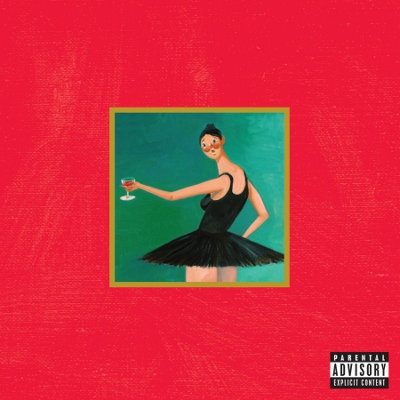 When the rumors began circulating around this release I was less than enthused. Word on the street was that each song would be upwards of six minutes long and would feature many of the oddities that made 808′s and Heartbreaks weak. While Kanye West spent most of the Fall 2010 releasing songs from the upcoming album completely free on his website, the buzz couldn’t be stopped. If this album was good or bad, it was going to make a huge splash when it came out Thanksgiving week. It did just that and despite the length tracks, it combines the best of Graduation and 808′s into the perfect balance of weird Kanye and the genius rapper Kanye.

The massive collaborations on this album seemed to work in West’s favor. Over the past few years, the hip-hop scene has had dozens of cut and paste jobs by big names in order to bulster another artist (can you say Snoop Dog in “California Girls?”). What made sense for West in My Beautiful Dark Twisted Fantasy is that each of the cameos fits. The Kid Cudi appearance on “Gorgeous” feels like a Cudi song, instead of like a West song with a Cudi “insert here” job.

Ironically, one of my favorite songs on the album (and possibly one of my favorites of West’s career) is the leadoff batter, “Dark Fantasy.” True with most of the album, West and a group of superstar producers sampled lot’s of classics in the album. “Dark Fantasy” features Mike Oldfield’s “In High Places” which provides the more than catchy hook in the chorus. The song is built around this catchy jingle but still has enough originality to work on its own.

The best part of the album is that Kanye West is performing that part of multi-platinum rapper instead of tortured artist. He lets go and goes back to what made him a household name in the first place. No one thought, “oh wow, this “Jesus Walks” song has some really good singing by this Kanye West guy.” We wanted a rap album after the ridiculous attempt at singing in 808′s. As simple as this concept is, a song like “Power” right at the beginning opens with a rap by West and puts a definitive smile on the listeners face. You quickly think to yourself: “I remember when he sounded like this.” It’s a great feeling.

Even the little musical interludes aren’t weird. They help to build hype for the next song instead of continuing into what becomes a drawn out song of pure boredom (remember “Welcome To Heartbreak?”). Rihanna’s hook in “All Of The Lights” is incredible and it wouldn’t shock me to see this song as a late album single. In addtion to Rihanna, the song also features smaller vocal performances from Alicia Keys, John Legend, The-Dream, Fergie, Kid Cudi, Elton John, Ryan Leslie, Charlie Wilson, Tony Williams and Elly Jackson. I’m not sure I was able to pick all of them out but Keys has a great moment in the breakdown.

Something that shocked me about the album is how little I was offended by the length of the songs. Even the longest song on the album “Blame Game” which stretches nearly eight minutes long is really solid. Featuring John Legend, it has the same feel of “Big Brother” from Graduation. The entire album, I was thinking that the remnants of 808′s would eventually show their face. On the second to last track (the last full length track) it did just that. The opening to “Lost In The World” brings the infamous autotune back into the picture. It does progress from there but the song is stained with West’s failed experiment.

“Who Will Survive In America” concludes the album with a Martin Luther King Jr. style speech. While it’s a little out of place, it helps to shine a light on the “deep messages” that West attempted to convey throughout My Beautiful Dark Twisted Fantasy. Albums of the month have great music paired with a great message and often performed by a great artist. This album has all three and is a true return to the rap career that made Kanye West, Kanye West.