Opinion: Women Stand In Unison In A Post Gagalyptic World

Generally, when we talk about people uniting, there is a positive overtone. If it’s Americans standing together after a great tragedy or celebrities coming together to help raise awareness for a cause. This year has made me question people coming together. More specific than people, I am targeting powerful women in pop music. It’s nothing against them personally. On their own, each of these women has displayed incredible star power. The problem is what has been left in a post-gagalyptic world.

As I wrote about earlier this year (Putting Lady Gaga Into Perspective), Lady Gaga dominated the music world for nearly three years. Even as we speak, her album “The Fame” which was released in August of 2008, still resides at #43 on the Billboard 200, spending its 105th week on the chart. Moving forward, it is crucial to look back and see how this incredible talent effected the rest of the pop world in which she resides. Long before Gaga, there were artists like Christina Aguilera, Pink and more recently Katy Perry and Rihanna. In the post Gaga world, one artist emerged as the apparent heir to the thrown in this newly created, unnamed genre. That person was Ke$ha. 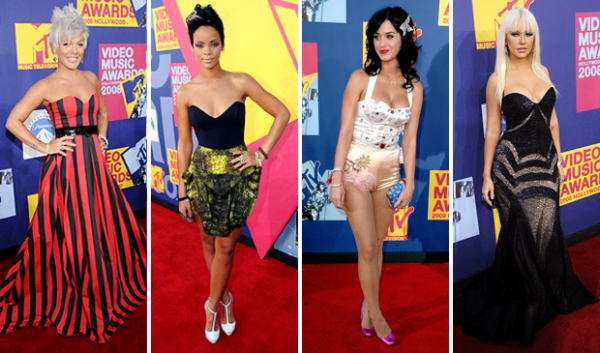 Pink, Rihanna, Katy Perry and Christina Aguilera at the 2008 VMA's

Those are the participants in this experiment. What these five performers had in common before Lady Gaga is that they each had a niche. Aguilera was the black to Britney Spears white. Pink was the party girl. Rihanna was the class of the hip-hop world and one of the most sought after collaborators. Perry filled the bubble gum pop gap left vacant by Spears years earlier. Ke$ha was barely a blip on the radar. Now, just a few years later, these five singers could effectively be one single entity as each attempts to fit into the party rock genre opened by the aforementioned Gaga.

In additon to putting Lady Gaga into perspective, I spent some time earlier in the year writing about this phenomena (America’s Pop Stars: Diluting Abilities To Fit Inside A Box). Not much has changed since then and I don’t want to sound redundant. What has changed is the sound of female pop in America. Each of these singers could easily sing the others song and a casual listener might never notice. While Katy Perry could perform Pink’s “Raise Your Glass,” Rihanna could easily take the reigns on Aguilera’s “Not Myself Tonight.” Would you even notice?

The answer undoubtedly is no. These once great stars has done everything in their power to make their sound closer to the party rock mold. What we are left with is a class of female superstars bringing nothing new to the table. Each of these songs will sell a ton of downloads but none help to define that singers unique presence in the pop world. One could argue that the only thing that matters when all is said and done is how many people you touch with your music. When everything sounds the same, does it really matter anymore?

A similar trend is happening for men. While many male performers are imitating the party rock format, there are enough unique qualities to make each act stand on their own. This trend is pointed out even more by this years female indie breakout star, Florence + The Machine. While these legends each try to copy one another, Florence Welch has taken advantage, delivering the most memorable performance from the 2010 MTV Video Music Awards. Is it a coincidence that in a year when all of these sounds have blended together, that a relatively unknown indie band was able to steal the show on one of pop musics largest nights?

I’m not sure that there is a lesson to be learned here. There are only so many sounds out there. I won’t pretend to have the answers. One place it could start is with these singers and them returning to their roots. Remember that Christina Aguilera once recorded “Beautiful” one of the most moving recordings of the last decade. Remember that behind Katy Perry’s bland singles from her new album are incredibly written songs like “Thinking Of You.” Remember that Pink’s greatness comes in her ability to write with more emotion than any other artist like in the 2001 hit “Just Like A Pill.” Each of these women have their names in the record books already. Now, all that’s left is for them to step out of the shadow in 2011 and force people to remember why we first fell in love with them.