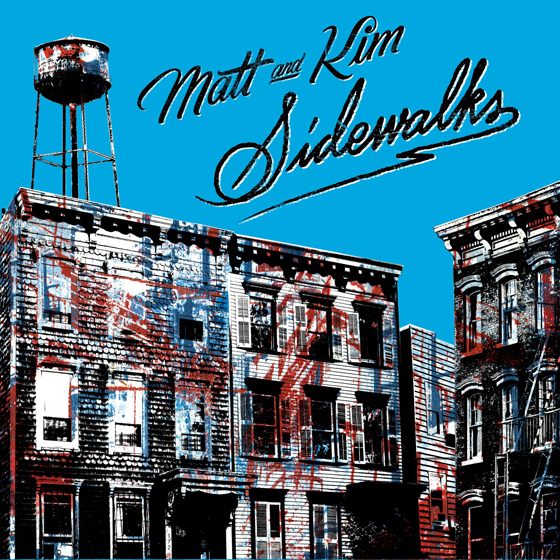 Post indie probably isn’t the word. Regardless, Matt & Kim’s sound is a perfect balance between modern day pop rock and the current electronic indie movement (a la Passion Pit). To be honest, I never gave their major debut “Grand” a fair shot. I fell in love (as almost everyone did) with “Daylight” the albums hit single. Coming into their new album, I was excited solely because of the promise of a single like that.

There’s something disappointing when the album starts with your favorite song. It’s very anticlimactic. Fortunately, the album holds the listeners attention well. The undisputed best song from “Sidewalks” is “Block After Block,” a perfect opener and high powered, lyric driven song. It has just enough synthesizer and features the familiar voice in a leading role. While many of the songs on this album help to fill out Matt & Kim’s sound, this one defines it.

A Troubling trend for Matt & Kim is repetitiveness. Many of their songs follow the same exact structure, making them fade to the back of the proverbial bus. The single “Cameras” was perfectly placed and very well done. Maybe it’s the lyrics. Maybe it’s the deep horns that help open this song. Something about it screams New York City. It just has that hometown feel as if this is their New York anthem.

Following “Cameras” is a synth run that, under normal circumstances would be described as irritating. An annoying synth that runs into a well written chorus helps to make up for the offense. That is the prognosis for “Red Paint.” It starts off with a synth that could make your ears bleed (Red?) but progresses into a great chorus in which Matt sings “Heads in the paint, Let’s make some stains!”

It is somewhere around here, four to five tracks in that the album begins sounding slightly repetitive again. It could be the over simplified drum beats or it could be the similar song structures. Songs like “Where You’re Coming From” and “Wires” would work as stand alone songs. They are actually great songs. Unfortunately, you catch yourself asking, did I hit the back button?

Buried amongst these “repeats” is a song that can only be described as gorgeous. It is a well written ballad that runs the gauntlet having a uniquely different sound while fitting in to the overall work. If “Cameras” was the New York anthem, then “Northeast” is the winter theme. It features sleigh bells and a smooth flow and an ominous deep rooted piano.

The end of “Sidewalks” sneaks up on you really quickly. Just as you’ve begun nodding and bobbing, the album hits its last song. “Ice Melts” is not a typical last song for an album. Its upbeat nature seems better suited to lead off than bat 9th (or 10th in this case). It seems that everything Matt & Kim do is slightly different than what everyone else is thinking. This song being the finale is no exception. Walking away, there’a a feel of satisfaction. Following a debut album that saw “Daylight” featured in numerous video games, television shows and receive over three-million YouTube views, you can only applaud an follow up that is this well thought out. They know their sound. They embrace their sound. They love their sound.