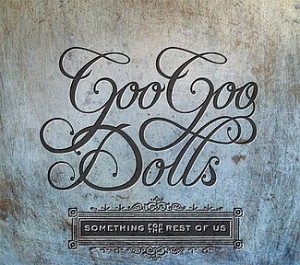 Skeptical is the one word I would use to describe the Goo Goo Dolls latest album “Something For The Rest Of Us.” I was very wary of weather a band that hadn’t released an album in four years and hadn’t recaptured the success of earlier albums such as “Dizzy Up The Girl” could get back to the top. One factor that led to my skepticism was the first single which had recieved limited air play on satellite radio over the last few weeks. The song, “Home” is the third song on the album and is one of the hardest songs to enjoy.

What makes the Dolls great is their true understanding of the contemporary rock genre. From a fast paced start with songs “Sweetest Lie” and “As I Am” the album seemed to suck the listener in. Although it could of fell appart with track three, the single “Home,” there was something for the rest of us (people who like good music) after that low point. There were parts in the album that really harkened back to the Goo Goo Dolls of old. “Notbroken” is a soulful, overproduced song that goes out of its way to sound perfect. The melodies in the chorus are brilliant and it really gives us a reason to continue listening.

The amount of quality songs on the album is almost uncountable. While very few songs (“Notbroken” being one of the few) stand out from the pack, the entire work is a really gorgeous piece of rock and roll collaborating. A song that harkens back to the early days of the Dolls is “Nothing Is Real.” It combines emotion based lyrics with a passion that only first manifests itself in the chorus. It is also a great example and showcase of the bands unmistakable talent to write great songs.

We’ll conclude here. My advice would be to listen to the whole album. Listening to just a few songs (unless they’re the true gems) won’t do this project justice. It is a complete effort and deserves a listening, if only for old times sake. While the modern genre that the Goo Goo Dolls helped to define in the early part of the decade continues to mold and mesh into other areas of music, it’s great to hear the veteran staple return, showing that they can still rock.