The Truth About "Get Him To The Greek"

Going into the summer, “Get Him To The Greek” had to stand out as a potential comedy blockbuster. Similar in hype to last years “The Hangover,” the movie demonstrates comedy through means of partying, doing drugs, drinking and having sex. What made the concept for this movie even better was that it was based on characters that Jason Segel wrote for 2008′s “Forgetting Sarah Marshall.”

The movie follows two characters who live in drastically different worlds who somehow find friendship. Right from their first interaction, the thing that made this movie work was the incredible on screen chemistry between Russell Brand and Jonah Hill. Displayed first in “Forgetting Sarah Marshall,” these two actors have a great comedic timing between them and are such opposites that it works perfectly.

What disappointed  me about this movie was Hill’s inability to break free from the typcasted role he discovered for himself in 2007′s “Superbad.” Alongside Michael Cerra, Hill helped to spawn the birth of a series of bro-mantic comedies (in which the plot is centered around two straight men’s relationship).

This movie seemed like a perfect opportunity to make his character deeper, and although he did explore having sex with women and having a girlfriend, the movie was ultimately about his relationship with Brand’s character. 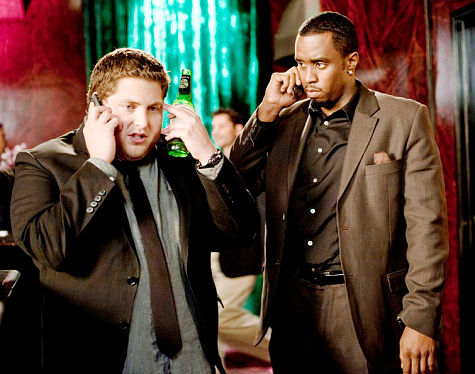 Without a doubt, the best part of this movie was the character Sergio Roma who was played by the one and only P. Diddy. Portrayed as a super rich, super greedy music executive, Diddy provided some of the funniest moments of the film. As many great comedies do, “Get Him To The Greek” acted as a spoof on the music industry and culture that exists within that vast world. Once again, Diddy and Hill share great on screen chemistry playing characters that could not be more different.

Overall, the movie worked. It wasn’t the funniest thing I’ve seen from these actors (“Forgetting Sarah Marshall” and “Superbad” were both funnier movies), but a decent storyline with trace elements from the aforementioned prequel made this a sure fire box office hit. As Hill moves forward with his career, I’m curious if he ever breaks this bromance typecast that he seems to be stuck in. One thing is for sure, if he keeps making movies with Brand and Diddy, no one will care either way.