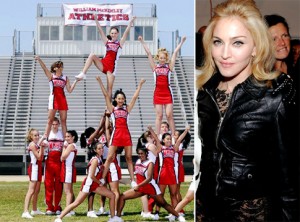 I would of been willing to give Ryan Murphy and the crew a pass on the first episode after a huge hiatus. Returning with a bang, they took the zonked “American Idol” crowd and woke them up with dazzling renditions of “Gives You Hell,” “Hello,” and “Hello Goodbye.” What made this episode work is that it set the stage for the rest of season one, providing us with some great musical numbers in between.

The second episode (which aired last night) took a huge step back, making “Glee” a cheap musical comedy. What made the first half of the season great was the emotional connection to the songs. I still get goosebumps when I hear Avril Lavigne’s “Keep Holding On.” I can recall the look on Finn Hudson and Rachel Berry’s faces as they sang the song to Quinn Fabray. There was a deep emotional connection in that song because of the episode.

A Madonna themed night scared me right from the start. My fear was that they would have to force Madonna songs to fit into an evolving story line. Although Maddona’s songs are great, limiting the writing to only these songs doesn’t provide for a huge amount that could happen with the plot. A slew of random songs littered the entire show and the plot went from dramatic to cheesy over the hour.

The only redeeming factor was the nights final song “Like A Prayer.” After an emotionless episode, the cast finally took the stage with some passion and made you feel one of Madonna’s best songs. Has the lesson been learned? I love the idea of having famous vocalists (a la Josh Groban) appear on the show but didn’t like having an entire episode devoted to one artists work. Let’s bring the emotional connection back to “Glee” before it turns into Fox’s “High School Musical.”