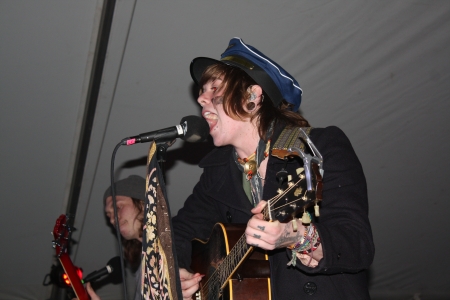 Christofer Drew, lead singer and creator of the persona NeverShoutNever has put himself into a very unique situation over the past five years. In a time dominated by “scene” bands, Drew has managed to stand out, performing acoustic, melodic music alongside 2010′s top pop artists. Taking a constructive attitude towards the bands he shares the stage with, he says that he has the opportunity to learn from his experiences and grow as an artist.

A former high school tennis prodigy, Drew gave up on those dreams to peruse music full time in 2007 at the age of 16, recording on his own and growing his reputation on Myspace. In an interview with Alternative Press, he recalled playing for empty coffee houses and often getting booed and laughed at, playing to the 25-and-up crowd at the age of 14. When I asked him about that time in his life he said “Everyday you have to appreciate it, I’m glad that I come from a humble background, it makes me truly appreciate and take advantage of every blessing that I have…”

It became evident early on in our discussion that while some of the pop stars in the “scene” circuit are obsessed with branding, bottom lines and sold out shows, Drew’s intentions are simpler. He is a spiritual person who will use words like blessings and positivity instead of fame and fortune. As with anyone in his situation, Drew knew that when it came to growing his career, he would have to be cautious, preserving the music, the thing he cherishes most.

I was very picky with the label situation because I didn’t want to be controlled, I wanted to have all my artistic values…I felt like Warner Brothers was a perfect match. They’re more of a career label, instead of just getting a big single and pushing it to radio, there more into just letting me do whatever I want and having a ten year career. I’m all about that vibe. I just want to keep growing as an artist and I think that a team is necessary for that.

While most of the bands he performs with (Hey Monday, The Cab and Every Avenue are all currently joining Drew on the AP Tour) are very conscious of their radio singles, Drew is in a unique position. Despite huge success within his genre, he has never had a true radio single. While two of the bands who open for him have seen time on the Billboard Pop Charts (Hey Monday’s “How You Love Me Now” peaked at #37 on the Billboard Pop 100 and The Cab’s “Bounce” peaked at #69 on the Pop 100 Airplay), Drew has seen only mild success with his latest album “What Is Love?” on the charts.

While these bands tour the country, opening for NeverShoutNever, and playing their hit singles, Drew takes the stage each night, as the crowd goes insane, as the headliner. Even as I stood under a half filled tent at SXSW, the crowd of half teen girls and half record executives exploded with energy as Drew and his crew hit the stage. He and the rest of the bands on the AP Tour experienced something they rarely do at SXSW. Walking the tight rope between indie rockers and pop superstars, the crowds in Austin weren’t there to party. Instead, they were in attendance to smooze, drink and talk business, something that Drew wanted nothing to do with.

Something I wanted to explore in my short time speaking with Drew was how he felt performing with other bands that have an electric, mainstream sound. Despite his pop style, Drew’s songs do not lend themselves to radio as well as these other bands yet he has seen equal and greater successes in his short time in music.

It’s great. I get to learn. I learn about whole different sides of music. I get to experience different scenes. I don’t really have a scene. I’m a lot different than the sceny stuff out right now. It’s really cool to just dive in and see what it’s all about. I don’t want to be limited…I think it’s great to go with some sceney pop punk kinda bands and then maybe go out with a really mature artist. I’m always learning, every tour is always with a new type of genre. 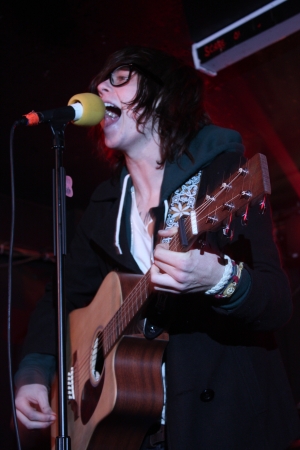 In spite of Drew’s thoughts about touring with different genres, most of the groups he has toured with fit under the category of “sceney pop punk” as he put it. The bands previous tours have included The Bigger Lights, Forever The Sickest Kids and Mercy Mercedes. Tours like these have given him an interesting presence in the pop world. He’s not playing with other groups like himself but is still managing to fit in. Something that Drew suggested was a future tour with someone like Jason Mraz or Jack Johnson. With his love for performing with the pop punk lineups, a tour with someone like Mraz or Johnson would give him instant validation in the adult acoustic world.

In the summer of 2009, NeverShoutNever released their third EP titled “The Summer EP.” The very first song from this album was titled “Happy,” and the opening line seems to sum up why Drew makes the type of music he does. A self admitted “sad person,” Drew has made happiness a key part of all his songs. He stressed that he makes this type of music so that kids growing up can be happier than he was listening to sad music as a teenager. “Whenever I start diving into the happy stuff like The Beatles or The Beach Boys, it’s enlightening…”

All of his past and current sucess aside, the most important thing for Drew and NeverShoutNever will be where they go from here. A strong following has opened doors all around the music world and it will be up to Drew to navigate them all successfully. I asked Drew, point blank if he would go mainstream any time soon. His response was quick and targeted:

If that’s where the music takes me, but I’m not going to force anything. If I write a song that feels a little more mainstream, feels like a radio single then maybe we’ll push it to radio. If not, then that’s ok too. We’re not trying to force anything, we’re trying to keep it very natural. If it hits mainstream cool. If it doesn’t, I’m totally ok with that too…if it happens then it happens.

With mainstream America knocking on his doorstep, Drew will need to act quickly if he wants to leave a lasting legacy in the pop music world. As someone who doesn’t plan to stay in music his entire life, Drew has plans to explore the world, using his music outside of the music business. Drew will provide one of the most interesting case studies in pop music over the next few years. A limited amount of time and a less than classic mainstream sound will provide challenges but Drew’s signature style is on the brink of becoming the next fad in pop.