“Kick Ass” is the latest work from Matthew Vaughn who brought us “Layer Cake” back in 2004. What made this movie emotional, exciting and enjoyable from the very begining, were the real life moments. A moment of true nerd, pride swallowing embarrasment. A moment of true heroism. These are things that make great movies great.

With all of the recent talk about the young cast and the graphic manner of this movie, I was anxious to see just how bad things really were. Honestly, they were worse than I had imagined. With as much blood as a Quentin Tarantino movie, “Kick Ass” delivers an amazing amount of action, shot in such a way that  you feel like you are apart of the scene. 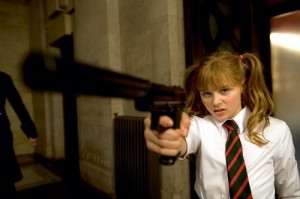 At the center of this graphic violence is Hit-Girl played by 13-year-old Chloe Moretz. Probably the most likable character in the movie, Hit-Girl, along with her father Big Daddy (Nicholas Cage), look to avenge their mothers death. Moretz does more killing than anyone in the film, racking up a body count of at least 20. She spends time twirling through the air, throwing knives, blowing peoples heads off at point blank range and cursing like a British sailor.

Despite her age, Moretz plays the character brilliantly. One of the only disappointments in the movie was the performance by Christopher Mintz (McLovin from “Superbad”). A role that could of been really funny, Mintz ends up being just mildly funny, playing the son of the movies main villain.

Sure the premis of “Kick Ass” is stupid. Yes the plot is as predictable as a Michael Bay action sequence. But regardless, “Kick Ass” got it right. The combination of a relatively unknown cast, some future comedic royalty (Clark Duke) and a 13-year-old girl who’s previous works have included voice overs in “Winnie The Pooh,” cartoons, made for a perfect blend of rich action sequences (rivaling those in “The Matrix”) and brilliant comedic timing.