Conan O’Brien, late night funny man in the news recently for his nation-wide tour called “The Legally Prohibited from Being Funny on Television Tour” is at it again. The man who started his career in late night has been absent from the news after getting administratively removed from hosting NBC’s “The Tonight Show.”

This made most of the college demographic completely upset with the network so much that a coalition started called “Team Coco.” Coco, a nickname that started thanks to Conan’s Tonight Show guest Tom Hanks, stuck since that day. This writer’s parents thought that Conan started off with a great bang and then his humor started to diminish with the same old “toilet humor” every night. Things like senseless sexual innuendo, ridiculous stunts and continuous fart jokes overpopulated the show. 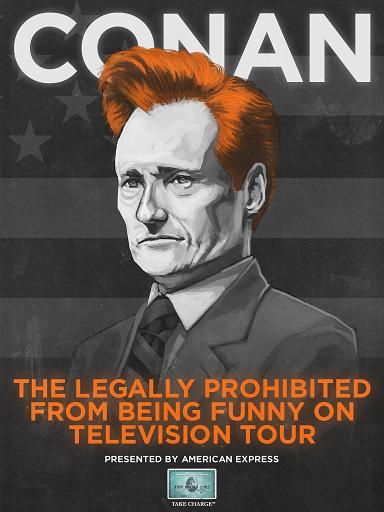 Many viewers felt that Conan was far more effective on a later time slot than the earlier 11:35 p.m. slot. This was because the audience age range was older at the 11:35 slot than on the 12:30 slot. Older demographic viewers were used to watching Leno right before bed. The marketing campaigns dwindled for Conan, and advertising for the “Jay Leno Show” started to infect our televisions and newspapers countrywide. By then having Jay Leno airing before Conan again was a virtual slap in the face to Coco. He still had his Tonight Show but still seemed like he was living in Leno’s shadow.

The “Legally Prohibited” tour started on a 32-city North American campaign on Monday night with a BANG! He had many guests and friends along with a night of funny gags. It was a great performance that will keep the entire audience on edge every night. A sad thought is that his fellow friend and bandleader Max Weinberg was not in attendance. Rumors and viable sources have placed numerous blame on Weinberg stating that he is reportedly on tour now with a new band and will not return to Conan’s late night gigs anytime soon.

After Conan finishes his tour he plans on making his new late night debut on TBS this fall. TBS is notorious for the catch phrase “Very Funny” and as a network that airs mostly syndicated shows. The only shows the network is known for are “Tyler Perry’s House of Pain” and “Lopez Tonight,” a late night talk show hosted by George Lopez.

This is a great image push for TBS as they jump on the Coco train. This could boost viewership for the entire network. For Conan, I feel like going from NBC late night, to TBS is a definite career downgrade. Conan started his career writing for “Saturday Night Live” and for “The Simpsons,” before getting a huge push to late night television. If the move is not a downgrade then it most definitely could be an image revamping. He could use the TBS show to play with some jokes and different techniques to harness his skills.

When Conan Moves to a new virtual home this fall, will he make friends? Will he fit in? Will he get lost in the dust or be the big fish in a small pond? Only time will tell. Tune into TBS this November to find out! Be sure I will. For more information on Conan’s Move and his current tour visit www.teamcoco.com or follow him @ConanOBrien