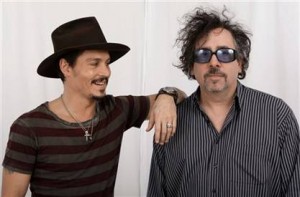 For longer than I care to recall, Tim Burton and Johnny Depp have been deemed the best at what they do. Depp is a master of the screen, playing legendary roles such as Edward Scissorhands and Captain Jack Sparrow. Burton is viewed as a directing god in Hollywood. Beginning with “Beetle Juice” in 1988, he has become a master of all things dark and twisted in the film industry. The question (and problem) I have surrounding the pair is; are they any good together?

Despite the box office success, critics and fans alike often trashed the movies. This entire thought, questioning Burton’s greatness and Depp’s success came after seeing the pair’s remake of Disney’s “Alice in Wonderland.” Overall, the movie was a sheer disaster and Depp was right at the center of the sinking ship. Looking back, the only movie that the pair worked on that was a huge success was “Edward Scissorhands.”

That critically acclaimed movie came at the very beginning. Since then, this pair of icons has made movies that are boring, carrying a lack of the dark ominous feel Burton should be known for. Most people know Depp from his work outside of the Burton realm. His best performances have come in the “Pirates of the Carribean” series and in his early work in movies such as “Finding Neverland” and “Blow.” Burton has done his very best work without the help of Depp, producing “Nightmare Before Christmas” in ’93. The only time this pair broke free from the generic, boring scripts they tend to gravitate towards was in their remake of “Sweeney Todd.”

This movie became an instant cult classic, taking a bloody musical and adding more blood, more gore and more sadism, the very ideals missing from Burton’s other work with Depp. It also helped that Depp stepped out and sang his own part on the movies soundtrack. It will be interesting to see where this pair chooses to go next. With so many actors out there for Burton to work with, my hope is that these two put their love for each other on hold and go their separate ways. A lack of originality in their projects has led them to become the modern day lame ducks in Hollywood, producing movies that are huge at the box office, but overrated and eventually forgotten about.