#musicmonday: Scouting For Girls – “This Ain’t A Love Song” 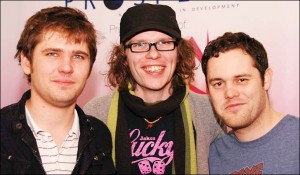 The Who:
It’s been 3 years since this band’s first album, this week they follow it up with “Everybody Wants to Be on TV,” their sophomore effort. This week’s #musicmonday is the first single from this album. Scouting for Girl’s is a London based pop group, their name a play off of the boyscout’s book “Scouting for Boys.” Their first self-titled album was a huge hit in England (double platinum), and while it never truthfully came to American, I was fortunate enough to get it. They released several singles from that album, “It’s Not About You” and “She’s So Lovely” and promptly fell of the map.

The What:
This first single back to their second album has already reached the top spot on the English music chart and maintained it for two weeks running. The song is the number one most played song on English radio over the past week. I was personally excited to see them back on the chart, having practically written them off as ever returning with another album.

The Why:
This first single picks up where their album “Scouting for Girls” left off. Beginning with a short string section orchestral introduction, the song immediately jumps in with Roy Stride’s unique voice on lyrics. All the characteristics that made the first album so good are retained. The vibrant keyboard, plucking staccato notes and chords throughout the entirety of the song, the catchy melodies, the lyrics overflowing with charm “I’m a little bit lost without you, I’m a bloody big mess inside,” the harmonies, and the hooks that tie everything together. I think it’s brilliant how they can breakdown into the bridge filled with orchestral composition and then follow it with another filled with a guitar solo. The way everything comes together makes this song a pleasure to listen to. From the quality of this song, I can only expect that this second album is just as good as the first.

(I think the video is great too)

Dave Hitchings Wherever I go music goes with me, and I’ve gone far. From England to America, and a quick stop in Australia, the places I’ve lived have inspired and changed me. Each one has left their individual musical imprint. The vast difference between these musical cultures leaves me open-minded and willing.
My respect for music runs deep, and I want to share this music with you. …see full bio