Bursting through the seams of lo-fi rock is Holiday Shores, a quartet from “The Sunshine State” of Florida. Last week the group performed at Brooklyn’s own Glasslands Gallery and recently released their first album, “Columbus’d The Whim.” The name Holiday Shores is inspired by the street where lead singer, Nathan Pemberton grew up. At age 22, Pemberton provides a perfect set of pipes to harmonize with the rest of the band. As a whole Holiday Shores has been compared to the talents of Fleet Foxes and many other lo-fi indie rockers.

Their voices locked me in from the first track Reruns all the way through the entire 10 track album. Phones Don’t Feud is one of their strongest songs and typically played last at shows. It’s the kind of song that reminds me of how big “A-Punk” (Vampire Weekend) or “Mykonos” (Fleet Foxes) were when they first reached their release. One of my favorite tracks off the entire CD is “Bradley Bear.” The song creeps in slowly with an eerie bass line then abruptly the infamous chimey guitars “chime” in, causing my senses to go nuts every time I listen. There is not a single track that is worth skipping and if you do I promise you will regret it. 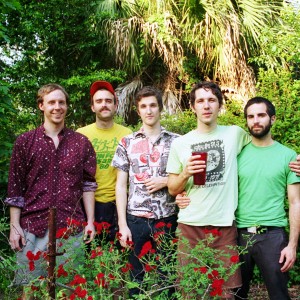 Even though the album is the first full length from the group, they are no amateurs my friends. These boys truly have a knack for composition down to their core, creating interwoven songs that almost seem to read like a book. The first time I sat down and gave a full listen to the entire album, it was on a train. With almost an hour later I was left feeling refreshed, like after drinking a cold glass of lemonade after a hot day.

Although Holiday Shores is from the Florida coastline, its record label is located in the epicenter of indie labels, Brooklyn, NY. Twosyllable Records is co-owned by its founders, two highly dedicated music lovers, Zach Pollakoff and Brian Kerr. When consulted about his first impressions of the group Pollakoff had this to say, “I loved their home-recorded EP. It had a certain quality about it that was uniquely attractive. The song writing was great, I loved Nathan’s Voice, the instrumentation was inventive, but the feeling that I was invited to peek inside Nathan’s life and look around, that’s what made that EP special.”

Summer is approaching. When driving down that stretch of highway heading to the beach, be sure to have music popped into your stereo. Don’t just have any old Beach Boys hit, give your speakers and ears something fresh. Something new. Something Holiday Shores.