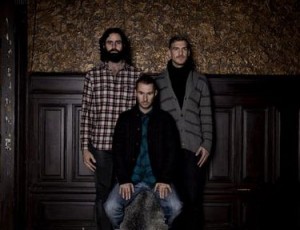 The Who:
This week’s #musicmonday, and the song I haven’t been able to get out of my head all week, is from Swedish producer team Miike Snow. Formed in 2007, Miike Snow put out their first official, self-titled, album in 2009. Miike Snow is comprised of songwriter Andrew Wyatt and producers Christian Karlsson and Pontus Winnberg.

The What:
To me, it seems difficult as to where exactly I first heard the song, “Animal.” It was officially released as a single back in February, but that doesn’t necessarily mean I’ve heard it on the radio. Since its release, it has been rolling through the backtracks of multiple TV shows; most recently it was played during the last few minutes of a recent episode of “Cougar Town.” “Animal,” was the first single off of Miike Snow’s fairly well received first album.

The Why:
The sound on this song is unlike most other songs out there. It lies somewhere between Vampire Weekend and MGMT (before their terrible second album), yet never really sticks to either. The throbbing music is what initially brought me in, a continuous plod through the entire song. But it’s the melody of various synths and voices that keep me addicted. This is not to say the lyrics are incredibly inspiring, in fact they’re fairly dull. But in the end it doesn’t matter, I’ll put the song straight on repeat, because everything mixed together is happy, bouncy and warm—a testament to producing team Christian Karlsson and Pontus Winnberg.

Dave Hitchings Wherever I go music goes with me, and I’ve gone far. From England to America, and a quick stop in Australia, the places I’ve lived have inspired and changed me. Each one has left their individual musical imprint. The vast difference between these musical cultures leaves me open-minded and willing.
My respect for music runs deep, and I want to share this music with you. …see full bio