Harris’ Album of the Month: “A Measure Of Wealth” by The Law 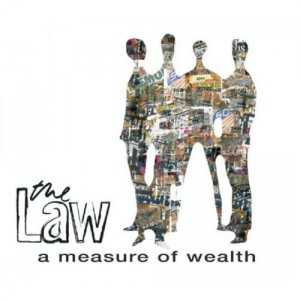 The Law's "A Measure Of Wealth"

Coming home from SXSW, there were two bands sticking in my mind. One was Jaguar Love, and the other was The Law. Hearing them at my very first showcase of the festival, their sound stuck with me through the entire week and has now followed me back to Connecticut. As a long time fan of rock with British roots, The Law has come to us from Scotland and brings a raw energy that is different than bands from America.

Reminding me of The Fratellis first album, “Costello Music,” The Law’s debut album has the killer combination of great hooks, raw energy and perfectly blended harmonies. If you are a fan of rock from across the Atlantic like The Switches, Arctic Monkeys, or The Wombats, you will find their sound similar, while the songwriting gives them a unique, fresh feel.

The third track, “Local Boy Lost,” is one of my favorite songs on the first half. It showcases Stuart Purvey’s unique vocal stylings and the musicianship between the guitar players. Directly following that is, “Man In The Moon,” which features my favorite hook on the album: “Oh why can’t you see, you’re like the man in the moon to me.” In some of the album’s middle section there are kickback songs that really end up reminding me of The Beatles. “Milk & Honey,” puts the Scottish accents front and center and (in my opinion) actually pay homage to The Beatles. In our interview, they stated The Beatles as one of their influences, along with the Rolling Stones.

Taking the fade-away method of album construction, The Law begins the fade with the second to last song, “City Boys, City Girls” (ironically, there is a Fratellis song called “Country Boys and City Girls”). The final song on the album begins with a huge open chord and moves into a ballad with some really cool guitar noodling mixed in. What ends up making this a great album is the way each song sucks you into the next one. Although it gets off to a slow start, it quickly picks up and leads you on a musical journey through the hills of Scotland.

Check out our two part interview with The Law on YouTube: Part 1 & Part 2.