Wrapping Up My Third Day In Texas At SXSW

Day three saw a huge improvement from day two. Filled with a tight schedule and a lack of good bands, day two left me wanting more out of SXSW. Luckily, day three delivered. I started my day with an interview with Jordan Witzigreuter, the frontman and main attraction in The Ready Set. After a quick interview (which will be posted on YouTube tomorrow), Jordan played in a sea of Lego’s while I snapped some photos of the madness. 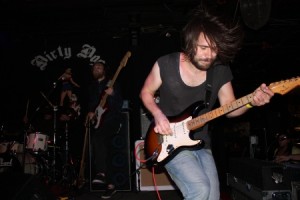 Second on my agenda was seeing Twin Atlantic, a band that I had written about, interviewed and listened to for the past two months but never actually seen perform live. What made their show even better, was the awesome band playing before them. Jaguar Love stem from Portland, Oregon and are a trio of musicians who took the stage by storm, lighting a fire under a daytime showcase at SXSW. You can see the band performing “Up All Night” on our YouTube page.

Twin Atlantic did not disappoint, showing the raw energy and natural british style coming from their great melodies. Playing songs from their first U.S. release “Vivarium” the band translated really well from album onto the stage, something they consciously tried to accomplish. After seeing the enormous line growing for the nights headline band Muse (at Stubb’s) I decided my time was better spent elsewhere.

Heading back to my hotel (in between the day and night showcases) I stumbled across a group of 50 standing outside a vacant showroom (formerly a real estate office). What was happening in the middle of the group was an incredible rap battle between two locals. It was amazing rapping and incredibly intense as the two went back and forth trading harsh words.

After dinner, I headed out to see Lights, a Canadian artist I had seen before. Opening for her was a Toronto based artist named Jully Black. Black had a few things going for her. She has a great band backing her, catchy songwriting and she is capable of kicking the ass of anyone who chooses not to listen (she’s quite a muscular woman). Lights was great as always (hopefully we’ll have an interview with her tomorrow) and with that I headed out to walk down 6th Street.

Stubb’s was filled to capacity for Muse when I arrived. I decided to wait for a little and see what I could hear from the streets. Turns out, you could hear almost everything clear as day. They opened with “The Resistance” and that was all I could listen to. Not being in there was killing me. Lucky for me I had other plans for the night. I headed to Dirty Dog (consistently one of the best venues for good, catchy rock bands during SXSW) to see Patrick Stump’s solo debut. I wont go into it here, but you can read my review of the show here. 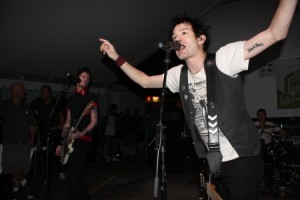 My night ended, seeing a band I had tried to track down for the last four years. Despite growing up int he ’90s, I had never seen Sum 41 perform live. They put on a killer show at Maggie Mae’s, rocking for a packed rooftop full of fans. It was nice to go to a show like this because instead of the usual SXSW business types, this show was jammed with fans of the band, people who actually wanted to rock out and have a great time. Sum 41 was happy to oblige.

That about wraps up day three at SXSW. Tomorrow should be a fun day, trying to catch all the bands that people have been talking about all week. Be sure to keep your browsers tuned in here for all the latest from SXSW in Austin, TX.