Patrick Stump Returns To The Stage At SXSW’s Dirty Dog 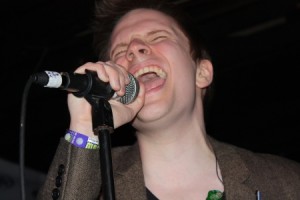 News of Fall Out Boy’s breakup sent shockwaves through the music industry. A band that saw dark and dirty club shows fade into sell out arena concerts in less than five years was disbanding and one of the founding members of modern alternative rock was no more. That was just over a month ago. Now, frontman Patrick Stump is back and ready to unveil new music and a new style. He chose to do so at SXSW in Austin, TX.

As a part of Fall Out Boy, Stump was often the second in control when it came to media hype. The much more charismatic Pete Wentz was often the talk of the town, while Stump took a backseat, reveling in his quiet personality. Even on stage, Stump would often be glued to his microphone, letting Wentz and the other members of Fall Out Boy take the lead when it came to stage presence. After dropping a large amount of weight, Stump is stepping out of that shell and is ready to smack the crowd around with some new music.

Taking the stage, the newly slimmed down Stump was almost unrecognizable until he began singing. Despite his anti-celebrity in Fall Out Boy, you could never doubt Stump’s incredible (and unique) voice. Despite some major technical issues through setup and most of the first song, Stump got through it and put on an energetic and fun set for the group of industry professionals.  It was surprising that when he hit the stage, it was just him. He had no band and instead, used a looping program (source of some of the malfunction in setup) to play drums, bass, guitar and piano all at the same time.

During his short time on stage, Stump showed his new attitude, delivering small jokes and talking to the crowd more than he would as a member of Fall Out Boy (Wentz was often the messenger when speaking to the audience). The best part about Stump’s return was the smile on his face. During Fall Out Boy’s final tour, I wrote that the band seemed to have lost the spark. They were drones, performing to a brick wall, showing almost no emotion. When Stump hit the stage, amongst the technical problems, he had a smile on his face and looked to be enjoying every minute of it.

Only time will tell what type of projects Stump will turn out as a solo artist but for a packed crowd at SXSW, he showed that he has what it takes to perform, leaving the Fall Out Boy legacy behind him.