Wrapping Up My Second Day In Texas At SXSW

Day two was a very different experience from day one. Where day one saw a careless wandering in and out of venues, day two say a ferocious schedule set up by my evil boss (who happens to also be me). Today I had the opportunity to interview four artists, two bands and two singer/songwriters. The two bands happen to both be from Scottland (see this earlier post about them) and the two singer/songwriters were Kate Voegele and VV Brown.

When I wasn’t interviewing, I was wandering the streets once again trying to find some good music. Today I was less lucky. I was able to find a group named American Bang, who performed at the Billboard Bungalow. After our interview, I was able to watch half of Voegele’s set, but aside from those two, the day went by without much mention. The evening was a little better as I was able to see Brown perform in front of a packed house at Latitude 30 and heard the tail end of Super Chunk’s set which was really good.

My night ended in a much more familiar fashion. I was able to get back to my comfort zone, watching alternative bands The Ready Set, Hey Monday and Nevershoutnever. What made these bands interesting is that they are not typical SXSW bands. They are (similar to my presence here) the anti-christ of SXSW. They are pop, they are hooks, they are merchandise. They are what this festival is not. Unfortunately, they didn’t really get it. Don’t get my wrong, they sounded great, but the mostly industry crowd wasn’t interested in clapping (or singing) along.

Either way, those three bands put on killer sets and I’m looking forward to interviewing both Hey Monday and The Ready Set before I leave Austin. What saved a mediocre day at SXSW was a single photo, taken during Hey Monday’s set. As soon as I took it I knew it was perfect and it put a huge smile on my face. Here is the picture in question: 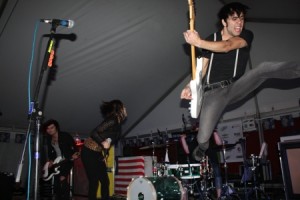