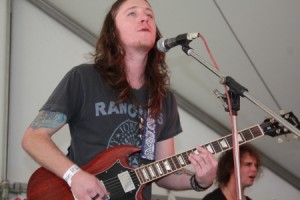 Sitting inside the Billboard Bungalow, I am  casually listening to a band that calls themselves American Bang. With a look very similar to The Darkness, these Nashville rockers have a classic but original style. Creating smooth but subtle hooks, the band has a fantastic on stage chemistry, each fitting into a role. There is the fun bassist, dancing guitarist (who can shred) and steady frontman with a huge voice. Drummer Neil Mason holds the whole thing together and it actually works.

When I first heard them, I had a completely different image in my head. I thought of a bunch of older guys from England wearing beaten up t-shirts. Instead, we have a well dressed, youthful group from Nashville, who have finally brought some original sounds to my ears on day two at SXSW.