Kids Of Survival Showcase The Rock Stereotype of 2010 At SXSW 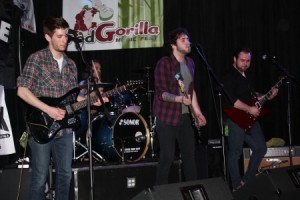 The middle ground. That is the space between greatness and garbage. Also called mediocrity, many of today’s rock bands are facing the challenge of overcoming this and getting to the next level. In recent years, bands such Nickelback, Stone Sour, Theory of a Deadman and Shinedown among others have used a somewhat generic model in the rock world. What makes this model appealing to both fans and musicians is that it works. It’s a simple method and it happens to sound great.

On my first day at SXSW I came across another band, hoping to fit this stereotype just right. They pull off the sound really well and their lead singer Gary Gordon has a great, over the top voice, perfect for this type of group. I’ll be posting some video later on that will give you a better sense of what this group has to offer. A solid, albeit unoriginal sound from SXSW. Check out video of Kids of Survival playing live at SXSW below the fold.