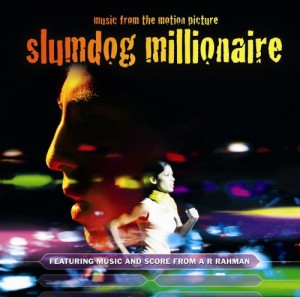 This movie was all the craze at last years Oscars, but I thought because of its recent win at the 52nd Grammy Awards I would honor last years best picture soundtrack during the road to the Academy Awards. Bridging an incredble language gap, A.R. Rahman wrote and performed many of the key tracks on this incredible collection.

Despite much of the singing being foreign in language to almost all American’s, the melodies have an entrancic tone that draws you into the music as an experience. Taking the movie completely out of the picture, the songs of this soundtrack tell their own story of Indian culture. The very first track on the album is one of the highlights. “O… Saya” is one of two songs that features M.I.A. on vocals alongside the Rahman, and it is simply perfect as the leadoff song.

Other, not so pop sounding songs such as “Mausam & Escape” are entirely instrumental but still carry a story with the amazing instrumentation. A mix of classic Indian instruments with computer generated effects makes this an album that bridges not only language gaps but technology gaps. This songs epic nature leads directly into the most well known track on the album, “Jai Ho.” This song went as far as to be featured on American radio stations and was later remixed by the Pussycat Dolls.

The end of the album has some great songs as well. “Paper Planes” by M.I.A. is the most notable song from the album but surrounding it are songs by Rahman that once again showcase this incredible composers talents. “Ringa Ringa” and “Aaj Ki Raat” help to close out the soundtrack and make this one of the best soundtracks ever composed. If your still skeptical of listening to an album that is not in English then I don’t know what I can do to convince you otherwise. I’ll leave you with this. Open up your mind, sit down and put this soundtrack on. By the end you will agree that there is something magical about it.