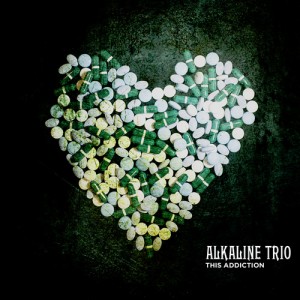 Is it possible for the mix of straight drum beats and power chords to get old? I think I’ve found the answer and it does not bode well for Illinois rockers Alkaline Trio. Right from the get go you get the idea that they are harkening back to their roots, releasing an album that would of fit perfectly into a ‘90s Napster download list. Unfortunately, in 2010 this sound has become dated.

With many of the songs sounding exactly the same, there is a skip mentality throughout a lot of the album. You hear one song and then when the next one sounds the same you are ready for the next track. The first two songs (“This Addiction” and “Dead on the Floor”) on the record are a perfect example of this. The third song “Lead Poisoning” brings something new but ends up sounding like an homage to mid ‘90s punk like early Green Day or Blink 182.

What has made other bands from this era relevant today is a fresh sound, playing off of what they did well years ago. AFI, another band with deep ‘90s roots put out a fresh album in 2009 and had solid singles to back it up. That might be what is missing most from “This Addiction.” With all the songs sounding the same, it always feels like your reaching for something and not reaching it. Track five “The American Scream” begins to sound like a plateau before delivering more of the same.

“Eating Me Alive” is probably the best song on the album, displaying an ear pleasing chorus and break from the rest of the albums sound. Unfortunately the feeling is short lived as it is one of the shortest tracks. “Piss and Vinegar” also brings out some new sounds similar to many bands on the new age indie circuit in New York (sounding similar to bands like Airborne Toxic Event).

When the album ends with the last notes of “Those Lungs” (a fast paced kick ass punk anthem), you are left with a general thought of emptiness. There is nothing there to make you come back and not one song on the album resonates with the listener. To die hard fans of Alkaline Trio this album more than likely met your expectations but without a devotion to the band I can’t see this being an album that will last long.