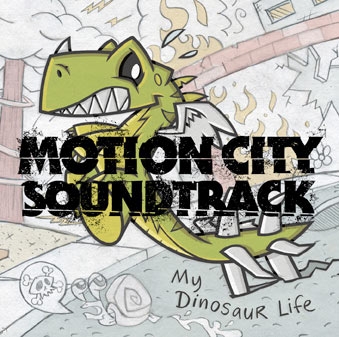 After seeing Motion City Soundtrack last week, I was inspired to continue sifting through their latest release “My Dinosaur Life.” It didn’t take long for me to realize that the song they opened their concert with was also the first song on the album. It is also one of the best tracks on the CD.

The first time I saw Motion City Soundtrack I was very disappointed in their overall performance. This time, they were really solid, lead by the vocal performance of Justin Pierre. This song, both opening the show and the album, showcases Pierre’s falsetto, a pitch that gives me goosebumps as I type this very sentence. A slow intro is followed by a powerful verse which really smacks the listener in the face as they begin an adventure through the album. The same feeling occurs in a live setting.

As Melissa wrote earlier this month, “My Dinosaur Life” is loaded with great sing along tracks. Motion City Soundtrack have been around since 1997, but it took them until 2010 to finally release a full package worthy of celebration. Maybe this time the band will be here to stay!!