Who is the Best Lyricist of our Generation? 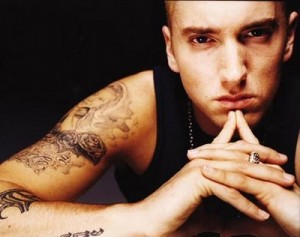 Let me start by saying that this is a debate. I want people to make a case for a particular performer, but I hope that everyone has their own opinion on this. First, let’s define what we are talking about by ‘lyricist.’ This is a person that writes and performs. We are judging them based on their ability to both write the words they are saying/singing and then performing those words in an expressive manner.

My case will be for Eminem. Over the better part of a decade, Eminem has been writing and performing some of the most memorable and best songs in the rap genre. I make the argument that rap is often the most expressive of all genres as far as lyrics go. Even as recent as his collaboration with Lil Wayne and Kanye West on Drake’s song “Forever,” Eminem’s rap stands out more than any of the others. Here’s an excerpt from that song:

We can make them look like bozo’s,
He’s wondering if he should spit this slow,
Fuck no go for broke,
His cup just runneth over oh no
He aint had a buzz like this since the last time that he overdosed,
They’ve been waiting patiently for Pinnochio to poke his nose,

I firmly believe that although Eminem is rapping about rape, killing, drugs, and overdose, his lyrical quality and rhyming ability make him the outright winner in this contest. His method for blending words together is incredible, and his ability to jam so many words into such a small place is astonishing. You could argue that this would make his performances seemed rushed. This is not true. He is simply able to sing (and enunciate) at a record speed.

Taking a look back at his older songs gives you a broader perspective on what he sings about. Although his latest album “Relapse” was generally based on overcoming addiction, his earlier works covered deep, emotional topics such as a failed relationship with his father and the troubled relation between Eminem, Kim, and their daughter Haile: songs like “Stan,” “Mockingbird,” and “Cleanin’ Out My Closet.”

Another favorite lyrical run comes in the song “The Real Slim Shady.” This song, like many of Eminem’s, does a great job of making fun of everyone from Carson Daly to Will Smith. He has a knack for making fun of people and staying topical but all the while being very witty. Here’s an excerpt from the song:

You think I give a damn about a Grammy?
Half of you critics can’t even stomach me, let alone stand me
“But Slim, what if you win, wouldn’t it be weird?”
Why? So you guys could just lie to get me here?
So you can, sit me here next to Britney Spears?
Shit, Christina Aguilera better switch me chairs
So I can sit next to Carson Daly and Fred Durst
And hear ‘em argue over who she gave head to first

Finally we arrive at “Loose Yourself.” The theme song to the 2002′ movie “8 Mile.” The movie is an autobiography (embellished for screen of course), and this song was the one that hooked everyone in. Unlike many of his other hit singles, this song was simple, very dark, and mysterious. After the brief piano riff, a now-infamous electric guitar comes in. Eminem leads out of the intro with:

His palms are sweaty, knees weak, arms are heavy
There’s vomit on his sweater already, mom’s spaghetti
He’s nervous, but on the surface he looks calm and ready
To drop bombs, but he keeps on forgettin
What he wrote down, the whole crowd goes so loud
He opens his mouth, but the words won’t come out

This song has become one of his biggest hits and is a song that inspires people to do great things.