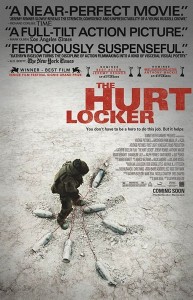 I knew that the Academy Awards would be announcing their nominations list in the days following the Grammys. What I did not know is that they would drag the beautiful Anne Hathaway out of bed at 8 AM to do it live on television. Couldn’t they do a prime-time, concert-style event like what the Grammys did? Regardless of when they were announced, I of course have beefs to pick and races to dissect.

First to the nominees for Best Picture, the Academy’s most sought after award. This year the category was expanded to make the nominees seem more “accessible” to everyone. Why not just include every single movie released in 2009 in this category at this point? Where’s the nomination for “Jennifers Body,” “Couples Retreat,” and “I Love You Beth Cooper?” This category has become a joke, and the Academy is to blame here. “Blind Side” (70% on Rotten Tomatoes) got a nominee because it is a story, while “Star Trek” (94% on Rotten Tomatoes) got shut out of this category. I was going to list the nominees in list form but I wanted to keep this story to a minimal amount of space. Here are the nominees: “Avatar,” “District 9,” “Blind Side,” “Precious,” “Hurt Locker,” “Up In The Air,” and “Inglorious Basterds,” “An Education,” “UP,” and “A Serious Man.”

Luckily for the people reading the nominees, the acting categories were limited to their normal five nominees. Although we would of loved to see nominees for Megan Fox (“Transformers: Revenge of the Fallen” and “Jennifer’s Body”) and Ashton Kutcher (“Spread“), we will settle for those who actually deserved nominations in this category. The nominees for Best Actor are: George Clooney, Jeff Bridges, Colin Firth, Jeremy Renner and Morgan Freeman. Nominees for Best Actress were: Meryl Streep, Sandra Bullock, Gabourey Sidibe, Helen Mirren and Carey Mulligan. We will further break these races down over the next month.

The only person who deserved a nomination and was shut out of the supporting acts nominees was Zachary Quinto for his portrayal of Spock in “Star Trek.” Overall this sci-fi movie was shut out of all non-technical categories despite being one of the highest rated movies of the year.

Finally, I wanted to use this space to discuss my discourse for “Avatar.” Although I saw and reviewed the movie a while back, I have a new flurry of frustration surrounding the Academy Awards nominations. Despite being an incredible breakthrough in animation and effects, the story and acting in the movie is dreadful. I am perfectly fine awarding it all the technical achievement awards for movies. At the same time, I can’t imagine a movie with a half-hearted story and stolen premise (remember “The Matrix“?) being considered for Best Picture.