Harris’ Album of the Month: “Smile Kid” by We The Kings 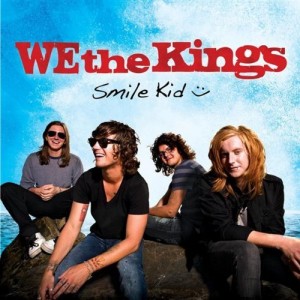 Once a band impresses you in one aspect of their overall product, it becomes easier to enjoy them as a package. Although I initially wasn’t impressed with We the Kings first self titled album, seeing them live changed my opinion drastically. They are easily one of the most energetic bands I’ve seen in the last few years and I’m looking forward to seeing them again as they tour through the east coast in a few weeks.

With their tour rolling through my area I figured I should brush up on their latest album. Listening to it again after its release two months ago gave me a great perspective on it. I’m a person who is usually impressed by debut albums and much less impressed with sophomore attempts. We the Kings might have broken that mold. Although I was more impressed with the singles from “We The Kings,” the entire package is stronger in their newer album “Smile Kid.”

What makes the album great from a pop perspective is that so many songs (similar to artists like Boys Like Girls) can be considered ‘singles.’ Each song begins with a straight forward verse, moves into a bridge that gets you excited and then explodes into the chorus. No song shows the style more than track four, “The Story Of Your Life.” The bands ability to explode into the chorus is really what can set them apart from the intense competition in this genre.

To get you started, I would recommend checking out “Summer Love,” “Anna Maria,” and the single “Heaven Can Wait.”