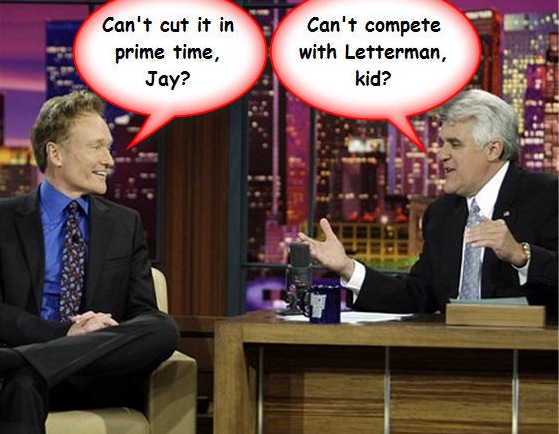 Picture from The Examiner Online

With the recent news that Jay Leno will reclaim his spot as host of the 11:35 PM slot on NBC (known for now as “The Tonight Show”) a war of words has been started by current host Conan O’Brien. After being given the show just six months ago, O’Brien will most likely be out of a job very soon as he resists the networks wish for him to return to a spot that follows Leno.

NBC executives should be ashamed of this situation. They have treated all parties involved like crap. Especially current host O’Brien. Many critics have already speculated that the red haired giant will soon be out of work with Jay Leno’s show leading into Jimmy Fallon’s “Late Night” (previously hosted by O’Brien). With so much drama, there is no shortage of commentary on the topic. Each night since the announcment, O’Brien has used his opening monolougue to take personal shots at NBC, their executives and Leno. One of my favorite jokes came on Monday night:

“This weekend no one was seriously hurt, but a 6.5 earthquake hit California. The earthquake was so powerful that it knocked Jay Leno’s show from 10 o’clock to 11:35.”

Many of the guests on both shows have taken sympathy with O’Brien including Zach Levy (“Chuck”), Tom Brokaw and Howie Mandel (who played a rousing game of “Deal or no Deal” to determine O’Briens career options). It seems that the outpouring cry of support from fans and celebrities a like will only serve O’Brien well in the future. Many speculate that he could move to rival network Fox and compete directly against Leno. Personally, I think a move to CBS makes more sense. Slipping in behind David Letterman could serve as a slap in the face to NBC.

Even the third place late night network ABC has gotten in on the fun. Chevy Chase appeared on Jimmy Kimmel dressed as O’Brien while Kimmel sported a Leno wig. Either way, the network will continue to be trampled on by O’Brien until an agreement is reached. Regardless of what happens, it’s making for very funny late night television.[poll id="4"]