The Truth About “Daybreakers” 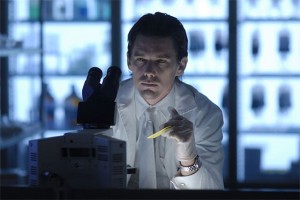 Shock value just for shock value. Horror movies have long used articles such as darkness, blood and masks in order to cause imminent fear in their audiences stomach. Other horror movies use shock value. This is that moment when everyone in the theater jumps in unison. Some people screech and others just twist in their chairs. This has been a great element of horror movies for many years and will continue to be in the future.

“Daybreakers” is a new age vampire movies in which humans are harvested (very similar to the machines in “The Matrix) for their blood. The movie further explores what happens when the humans become scarce and human blood turns into a needed commodity. Following the story of Ethan Hawkes character Doctor Edward Dalton, the movie shows the relationship between humans on the run and the kind hearted doctor.

The concept was great. Making you think about life in 2019, it was a believable scenario (if you believe in vampires of course) and was pulled off really well. There were moments of sadness and a deep love story. If left as such, the movie actually had some potential. Where “Daybreakers” went wrong was in the aforementioned shock value category.

Certain movies get it and certain ones don’t. Movies such as “Amityville Horror” and “Scream” got the shock value right on the nose. Other movies pull off the horror genre without any shock value. The example I love in this case is “Saw.” The original movie used almost no shock value and still showed pure terror and horror. Back to the movie at hand. “Daybreakers” took shock value slightly over the top.

Director Michael Spierig used it in a very random and unnecessary way. The movie could of been done in a more smart and concise way, without having bats flying across the screen at random times, frightening the entire audience. By relying on the concept and story to be scary, they could of done with a lot less of these forced ‘scary moments.’ Overall it is a movie worth seeing if you enjoy horror and vampires combined. If either one of those isn’t your cup of tea you will be left disappointed (and possibly in need of new underwear).