The Truth About “Sherlock Holmes”

The most anticipated movie of the winter finally arrived on Christmas Day in the United States. After a heavy advertising campaign that started a long time ago, “Sherlock Holmes” was finally here and opened with a huge weekend box office. The problem for me is that it wan’t very good. 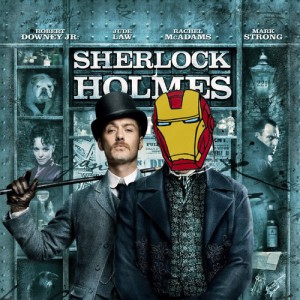 Robert Downey Junior (“Iron Man”) was cast as Holmes and Jude Law (“Cold Mountain”) as his assistant Watson. Rachel McAdams (“Wedding Crashers”) would be Holmes squeeze and Mark Strong (“Syriana”) played Lord Blackwood, the movies villain. With such an amazing cast I couldn’t imagine where this movie would go wrong. What I forgot to take into consideration was the director.

Guy Ritchie who is most known for his work in the movies “Snatch” and “RocknRolla,” did a simply terrible job with “Sherlock Holmes.” From the fake looking CGI to the way each character delivered their lines to the out of place action scenes (the boxing scene if you’ve seen the movie), the direction of this movie was completely lost. You can’t argue with the talent. Downey and Law are both fantastic actors with long resumes to speak of, leaving only Ritchie to blame.

From what I’ve been told, he has a very “unique” style of both writing and directing. According to some, “you just have to like this type of movie.” It worked in “Snatch.” It worked in “Lock Stock and Two Smoking Barrells.” It did not work for “Sherlock Holmes.” What should of been an amazing story with great action scenes, turned into a yawn filled wish to see Downey in “Iron Man 2.”[poll id="3"]