The Truth About "Invictus" 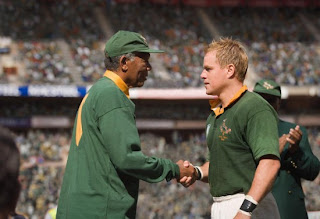 Previews are often a confusing method of advertising. Sometimes I see a preview and can’t wait to see a movie. Other times I see it and immediately disregard it. Still other times there is an area in between in which I can’t make up my mind. Certain days I want to see it and other days I think it looks like a waste of time. “Invictus” was a perfect example of this final feeling.

Seeing the preview over and over as they advertised the crap out of it, I continued to flip flop weather I wanted to see it. Finally making it out to see it this week I sat down in the theater and became pretty interested in the entire story line. Right off the bat Morgan Freeman shines as Nelson Mandela in South Africa. His performance is Oscar worthy as he has become the benchmark for great roles over the years.

Matt Damons character was more tricky. He is not introduced into the movie as a main character for quite a while but when he finally becomes important as Francois Pienaar, captain of Springboks, South Africa’s rugby team, he is the actor we have come to know and love. Most of the movie is spent setting up a situation in which the team will lift the country out of apartheid as they come together to support each other and the Springboks. The relationship between Damon and Freeman is truly amazing. Their on screen chemistry rivals any other pair.

My complaint with the movie is its allotment of time. The movie is split into two halves. One half is about the set up to the tournament, showing the racial barriers that exist in the country. The second half shows the sport actually being played as Springboks competes in the World Cup. For my liking there was too much time spent in the set up and then the movie quickly approached the ending. Despite this minor issue, the movie is really well put together and will certainly contend in many of the top Oscar categories.