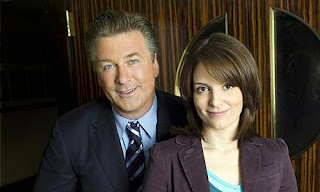 Looking back at the last decade, there have been some huge shows begin and even larger ones come to an end. During the decade was saw the end of “E.R.” “Everybody Loves Raymond” and “Sex In The City.” We also saw the emergence of some new great shows such as “Lost” “24″ and “The Office.”

I spent some time doing research and come up with solid reasoning why “30 Rock” is the best show of the decade. Although it has only been around since 2007, the show which is both critically acclaimed and loved by fans, has created big laughs, replacing “Friends” as the Thursday night anchor. No easy task.
Of course there are statistical ways to reason “30 Rock” as the winner. Winner of an amazing twelve Primetime Emmy’s, the show doubles the amount by “Arrested Development” and quadruples the amount from “The Office,” NBC’s other hit Thursday night show.
Another fact that separates them from the rest of the group is the type of awards they have won. Tina Fey and Alec Baldwin have been recongnized multiple times for their acting in the show and Fey has been awarded for writing more than once.
Shows such as “Law and Order: SVU” have won Emmy’s (four total in the decade) but all of theirs were won by Mariska Hargitay. “30 Rocks” ability to spread its Emmy’s among the staff prove it is the true champion.
The final two shows I will compare are “Mad Men” and “Lost.” The top two dramas of the decade put up an impressive fight but when it is all said and done “30 Rock” comes out on top. “Mad Men” has won an impressive nine Primetime Emmy’s falling short of Rocks twelve.
“Lost” is an interesting case. Despite only winning four Emmy’s in the decade, it is among the most popular shows of the decade, drawing viewers in excess of 15 million. The show which follows a circular plot line is generally either loved or hated by viewers (because of a confusing story line) loosing it points.
When the dust settles and we look back at this decade a few years removed, it will be clear that “30 Rock” was the best show of the decade and you could probably make the case for Alec Baldwin and Tina Fey as the actor and actress of the decade (in television of course).