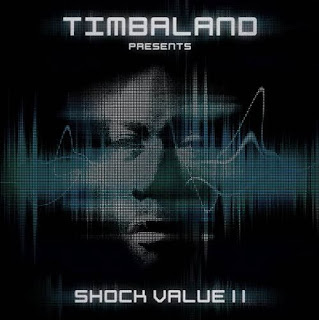 At the American Music awards in November, I heard a song by Timbaland which featured Nelly Furtado and SoShy called “Morning After Dark.” From my first impression I thought it was a really solid song and although the hook made almost no sense, it was very soft on the ears and made you hum along.

With that in mind I was really looking forward to “Shock Value II” the follow up album to “Shock Value” which was certified platinum by the RIAA in the United States. High hopes often lead to huge disappointments and this was an unfortunate casualty of that effect.
Opening with a “THX” blurb, DJ Felli Fel has a 49 second intro which made me smile (thinking this would lead to a great album). I was wrong. That less than a minute song is the best thing on the album until the single “Morning After Dark” at track eight.
Each song on the opening half of the album just blends together into something that is simply boring. No songs stand out and there is a complete lack of hooks in almost every song. I hate to compare it to such a terrible album but for some reason it brings back nightmares from “808s and Heartbreak” Kanye Wests 2008 disaster.
Making the songs more of a letdown are the amazing guest appearances. The first seven tracks include cameos by Justin Timberlake, Miley Cyrus, Drake and Chad Kroeger (Nickelback), yet none of the songs stand out in any way. Post single, the album gets better.
Katy Perry’s appearance on “If We Ever Meet Again” makes it a solid song and possible second single. “Can You Feel It” is the next song and although it is a good song, it sounds too much like the single “Morning After Dark.”
“Ease Off The Liquor” is the only song on the album that is credited solely to Timbaland. With an appearance by an unknown, unnamed female singer, this is one of the better songs on the album. It was featured great production and finally a hook worth sinking your teeth into.
For me one of the most surprising cameos on the album comes from The Fray. Clearly providing the piano backing, lead singer Isaac Slade appears in the chorus and does what he does best; melts hearts with his smooth voice. This stands out as one of the best collaborations I can remember to date.
Another surprising cameo comes from Aussie rockers JET. The opening of “Timothy Where Have You Been” is the song “Timothy” from JET’s debut album “Get Born.” It turns into a slow, classic r&b jam with JET returning in the chorus making it a listenable.
Daughtry and One Republics appearances go without much notice. The songs are easy to skip and rather boring. “The One I Love” features Keri Hilson who does a really good job in a last ditch effort to save this album. Ending one song later, “Shock Value II” will sell hundreds of thousands of albums when simply purchasing the few good songs from iTunes would serve you just as well.
After an amazing product in “Shock Value” it was only a matter of time before Timbaland disappointed us. Although I didn’t think it would come this soon, this album is a waste of time. Buy the singles and few hidden gems and then move on.