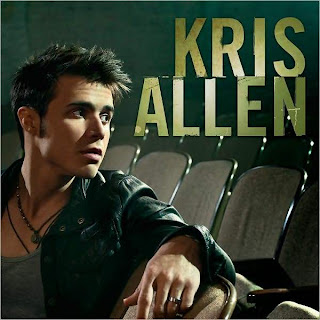 After watching the American Music Awards last night I decided it was time to give Kris Allen his fair shot. Although I am on team Lambert, I am an equally opportunity listener and therefore gave a listen to the self titled debut. Just as a side note, I felt bad for Allen because Lambert was chosen to perform and he didn’t actually win.

The first song from the album is pure magic in a song. From the opening notes by Allen, “Live Like We’re Dying” drives and the song showcases his pure (and surprisingly powerful) voice. Serving as the first single, it will give him a platform to stand on outside of Ryan Seacrest’s stage.
With a very slow fade out the next song “Before We Come Undone” starts much slower. A much more revealing ballad sounding intro gives way to electronic sounding drums with carry Allen into an extremely poppy chorus. Not expecting this turn, it was nice to see him exploring a more mainstream sound as opposed to his mellow songwriter style showcased on “American Idol.”
Once again Allen surprises on track three with “Can’t Stay Away.” It seems that early on the album is bringing very uptempo songs to the table. This song screams Maroon 5 from Allen’s vocals to the synthesized electro sounding keyboard. If he can achieve half the success of Maroon 5 he’ll be happy. It’s a nice sound to have.
“The Truth” is the first song on the album that does not blow me away. Almost more a credit to the first three songs being great, this song is good but certainly below the standard set early on. The more I listened the more bored I became of this fourth track. Finally to the rescue was “Written All Over My Face.” This song revealed something interesting about Allen. He is at his best when he’s racing through lyrics. He’s particularly gifted at it actually.
With that, the album takes a definite step backwards. Going into what I thought the album would be, the songs become more singer/songwriter in style. Less hooks and more slow tempos drag this album for me. With the cookie cutter in hand the songs begin to all blend together showing none of the creativity and energy shown in the front of the album.
“Alright With Me” restores a small amount of faith with its driving acoustic guitar. The upbeat jam is surrounded by more slow songs that do nothing for me. It’s not as much the style of song but the lack of a unique style that makes these songs flop in my eyes.
The final song on the album is “Heartless” a cover originally performed by Kanye West. Showcased on “American Idol” the song is punched up quite a bit for the record and is certainly one of the best songs on the album. Testament to West, the song translates perfectly into an acoustic rock jam.
Overall the album could loose six songs and I would be perfectly happy with it. As it stands, “Kris Allen” is a solid album with some very solid performances. This week we will find out which “Idol” reigns supreme as Adam Lambert releases “For Your Entertainment.”