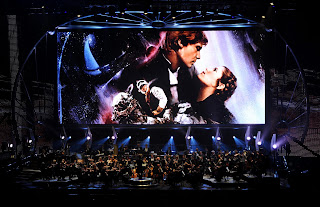 Spectacle. Spectacle is the only word I have to describe what I saw last night at the Arena at Harbor Yard in Bridgeport, Connecticut. Star Wars in Concert drew in an audience larger than anyone could of expected from all corners of New England. Arriving at the arena I was taken a back at how many cars had arrived for the event.

Walking in expecting a nerdy vibe, I was greeted with a very family friendly atmosphere. There were more families in attendance than there were Princess Leia or Boba Fett costumes. This shocked me. The music itself was secondary to the grand spectacle that the production team put together.
As the lights turned off, the orchestra began the Fox 20th Century theme song followed by the opening credits of “Star Wars.” Everything from the lights to the musicians made the entire show grand and magical. It’s hard to describe the feeling of sitting in the arena listening to this music that helped back the greatest movie series of all time.
Looking behind me, it was amazing to see an arena, jam to capacity and generally held for sporting events or pop concerts, set as the stage for music that almost every person in America knows. The host of the show was Anthony Daniels, the famous voice of C3P0. At one point he broke into full character and said “the possibility of successfully navigating an asteroid field is approximately 3,720 to 1.” He perfectly led the orchestra through the entire saga with perfect timing and prose.

People often look down upon classical music. It’s often boring and used to lull people to sleep. This music is none of those things. It was exciting and to my shock, my roommate, who has no tolerance for anything in the performing arts, loved this show. This might of been the biggest surprise of the night.
I hope that more concerts like this continue to take place. A tour that brought the music of John Williams through all of his movies would certainly appeal to this same audience. It worked for “Star Wars” why wouldn’t it work for “Indiana Jones” or “E.T?”
Check out my videos from the show on YouTube!!