Did Seth MacFarlane Really Just Do That? 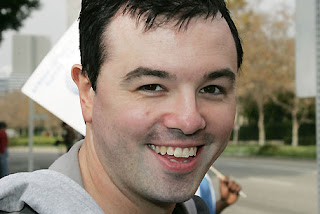 Anyone who watches NBC’s “30 Rock” may remember an episode titled “The Funcooker.” In the episode character Tracy Jordan (Tracy Morgan) decides to purchase air time on NBC so that he can curse on television. This rational is short lived and comes about because of a sponsor drop off for TGS (The Girly Show with Tracy Jordan, the shows hypothetical ‘live show’).

With that in mind I skipped Sunday night football in favor of watching one and a half hours of “Family Guy” programing. An episode of the show was followed with “Seth and Alex’s Almost Live Comedy Show.” This variety show type program featured Seth Macfarlane (Creator, writer and voice of Stewie, Brian and Peter Griffin) and Alex Borstein (Louis Griffin) paying tribute to the show that has made them household names.
Spending their 30-minutes making fun of jews, Renee Zelwegger, and Marlee Matlin the show was filled with funny songs and skits in an “SNL” style. The Matlin bit is particularly funny as she comes out on stage to confront Borstein who is known to impersonate her on the show. We learned a few things from Macfarlane on Sunday night. First, he all but owns Fox. Second he has no soul and will surely end up in hell. Third, he is one of the best and funniest people in the world and hopefully this won’t be the last time her performs in that type of setting.