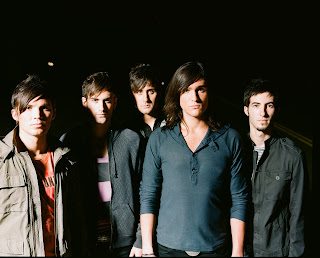 After reviewing the self titled debut album, I waited four months before arriving at Crash Mansion to witness a live performance. Packed into the very trendy, very underground club on Bowery in New York City was a collection of family, friends and business associates. They were all in attendance to cheer on the band during a filmed performance for Fearless Music, an online television network that broadcasts live performances of small bands, primarily in New York.

Being filmed had it’s advantages and disadvantages as an audience member seeing the group for the first time. On the positive side, the songs were performed perfectly and the sound was impeccable. The other side of the coin featured things such as a drum shield to isolate the sound coming off the loudest instrument and stanchions which did not allow for the audience to actually get up as close as they would of liked to the stage.
All of this into consideration the band put on an excellent show. When I interviewed Tyler Gurwicz (lead singer) a few months ago he said that many of the songs on the album “came from a really honest place of pure excitement for the music and it came from a place where we were completely free to experiment and collaborate and lyrically they mean a lot to me.” With that in mind I had a good platform to stand on for the live show.
The band was crazy, exciting and very passionate in the delivery. A great mix of harmonies and chants from the band gave the entire show a very live atmosphere despite the cameras rolling. Although they did not perform a personal favorite song “Rooftops” they did perform other favorites such as “Fingertips” “Battlefields” and “Hot Damn.” Each song drove Gurwicz into a manic state as he practically put the microphone into his mouth delivering the lyrics with amazing enthusiasm.
At one point the band spoke to the fact that although there were a lot of suits in the crowd, he wanted to see some movement. This point was directed at the fact that much of the crowd either worked for the band, worked with the band, owned the band or had grew up with the band. Being in this type of company was very fun and I had a great time checking out a band for the first time that I had spent hours of my life writing about.