Deep In The Heart Of Texas: Music in Austin 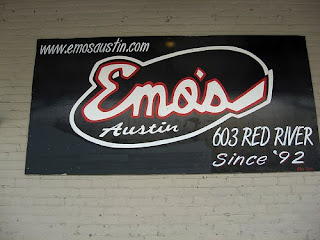 Sitting in the lobby the evening after arriving in Texas and I’m somewhat overwhelmed. Venturing outside our hotel this morning we walked down 6th Street and were immediately surrounded by bars, restaurants, clubs and live music venues (sometimes all combined into one).

The amount of live music venues was astonishing. All pounded inside one single street that was about ten Manhattan blocks long, were venue after venue. What made it all the more interesting was that inside each one was a band.
These were not places that ever go quiet. On a relatively quite, rainy night in Austin each club had a band residing inside, playing music that ranged from country to jazz to classic rock covers.
For someone who has never explored much music outside the east coast, I am really enjoying the fact that music seems to surround everything here. Aside from music I am completely in love with Austin’s food. So far today I’ve had BBQ and Mexican, both of which were to die for. Especially the guacamole.
While I’m here I am hoping to check out a concert at Emo’s, which is the local rock venue (for larger acts). Tonight Ben Kweller was performing but with zero energy left in my body it was a tough task. Tomorrow starts the media conference I am here for but it is clear that Austin really is a great town.