The Truth About Couples Retreat 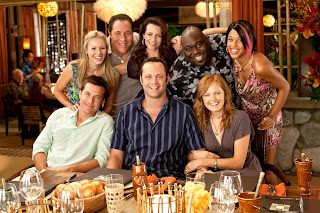 After receiving generally negative reviews, I wondered if a cast that included Vince Vaughn, Jason Bateman and Kristen Bell could possibly be bad. This week I went to the theater to find out for myself. To my delight, it was a very funny romantic comedy with all the trimmings you would expect from the two main men.

Each relationship within itself is relatable to real life. Vaughn’s relationship is slowly falling apart as neither partner can make time for the other. Amongst the three other relationships the one that I love is Bateman’s relationship with his wife Cynthia (Bell). They are organized, in love and unable to have a child. There is just something about these two playing extreme OCD’s that makes this entire story light and fun.
Although the story is beyond predictable the actors and actresses make this a good movie. It does nothing to blow you away but in the same way past movies have, the cast makes it all worth the price of admission and popcorn.