The Truth About Law Abiding Citizen 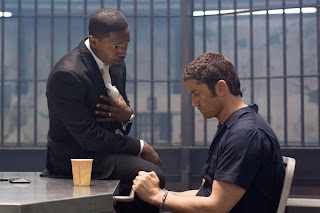 Boring action dramas. Over the past five years I have been dragged to, willingly gone to and ignored, more action drama’s than I care to remember. Although I lost a lot of respect for Gerard Butler after he starred in “Gamer” he is back on my good side after an amazing performance in “Law Abiding Citizen.”

Alongside Butler was Jamie Fox who I have enjoyed watching on screen since his dramatic performance in “Ray.” The pair create a really enjoyable relationship on screen and although they are at odds in this movie their interactions are very well performed. What made this movie great was the realism present throughout. Despite much of the premise being far fetched, it was still based in a world of real people and real stories.
Many of the large plot points (people getting killed, etc.) were predictable but the movie itself was not. You were on the edge of your seat and had your heart racing quite a few times giving it a great suspense.
Finally, I enjoyed the timeline of this movie. After watching the trailers, I was made to believe that most of the movie would take place with Butler in prison and things going on outside of prison. To my delight, the first quarter of the movie showed us a detailed back story and in doing so, gave us something that many other drama/suspense/action movies do not.
Another movie that is well worth the price of admission, “Law Abiding Citizen” did a fantastic job restoring Butlers image and continuing Fox’s legacy.